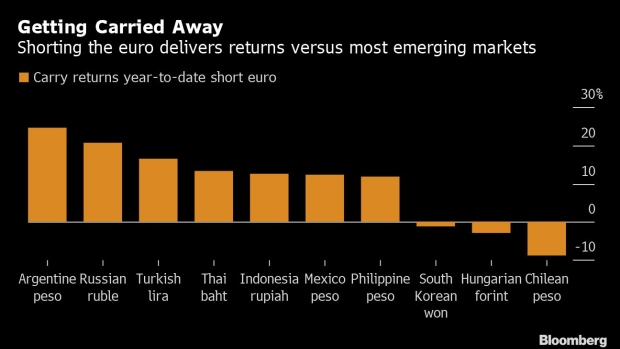 A one euro coin sits on 20 euro banknotes in this arranged photograph in London, U.K., on Tuesday, Sept. 19, 2017. The euro climbed 0.3 percent to $1.1986, the strongest in more than a week. Photographer: Chris Ratcliffe/Bloomberg , Bloomberg

(Bloomberg) -- The euro is being transformed into the currency of global borrowing, explaining its struggle to rally this year and suggesting it may slowly replace the dollar, according to Deutsche Bank AG.

The common currency is increasingly being used in international borrowing, inter-bank funding and cross-border carry trades, Deutsche’s global head of currency research George Saravelos writes in a note. This helps subdue the euro during periods of risk appetite, but could contribute to volatility and a rise in the currency when risk aversion returns.

“No one wants to hold euro cash as an asset anymore but everyone wants it as a liability. As a result, the euro zone is emerging as the new global provider of liquidity to the international financial system, slowly replacing the dollar,” wrote Saravelos. “Europe is becoming the world’s new carry trade.”

The investment strategy involves borrowing in a low-yielding currency and putting the money into alternative currencies with higher interest rates, or other assets with stronger returns. This works well when volatility is low, but Goldman Sachs Group Inc. has suggested certain dollar-neutral carry trades on the possibility the global economy will steady. Meanwhile, it has been profitable to use the euro to buy 20 out of 23 emerging market currencies this year, according to data compiled by Bloomberg.

The euro has slumped more than 3% this year and volatility in the euro-dollar pair hit record lows late last month. The lack of price swings has been attributed to steady monetary policy outlook at the European Central Bank and the Federal Reserve, as well as fading recession fears.

Instead, Deutsche Bank’s Saravelos argues that outflows based on the increased use of the euro as a funding currency for liabilities are keeping the currency subdued when risk appetite is high. The euro should have been appreciating against the dollar and moving closer to 1.40 over the last two years, he added.

“Despite the huge swing in the external accounts, the euro has stayed weak,” he said. “This is unprecedented.”

To contact the editors responsible for this story: Paul Dobson at pdobson2@bloomberg.net, William Shaw, Michael Hunter