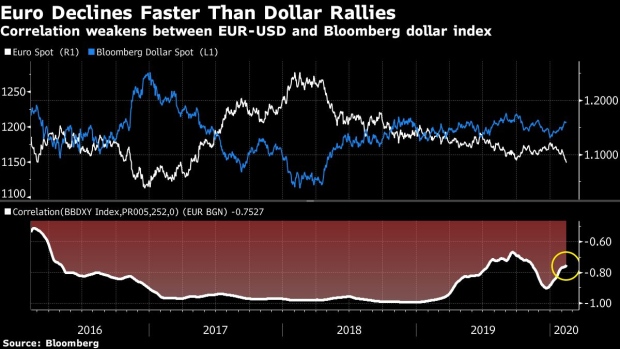 (Bloomberg) -- This was supposed to be the year of the euro. Instead, the currency is extending its worst annual start since 2015 as the coronavirus scare highlights its deep vulnerability to wider market shocks.

The shared currency has already lost more than 3% this year, forcing banks to tear up earlier upbeat predictions, and there is little relief in sight. Its slump to the lowest level since 2017 is now leading hedge funds to add to short positions and options traders to boost bearish bets.

The euro has been ambushed by anxiety about the economic shock of the virus outbreak and political risks from Germany to Ireland. Also weighing on the common currency are still-unresolved Brexit risks and concerns that the U.S. could impose import tariffs on European cars. The euro’s disappointing run this year is now bringing back a debate about its basic design flaws.

“The big picture is that the euro area remains a sclerotic structural mess,” James Athey, senior investment manager at Aberdeen Standard Investments, said in emailed comments. “It consists of divergent economies with a range of idiosyncratic structural issues, who all fudged convergence criteria, and are now trapped in an ill-fitting straight jacket of a monetary union without fiscal transfers.”

The currency, adopted in 1999, is shared by 19 countries from the world’s No. 4 economy Germany to tiny Malta. After gaining on the greenback in its first decade, the euro saw the European debt crisis hurt its prospects of becoming a reserve currency to knock the dollar off its perch.

The slide in euro sentiment has been sharp at banks. Credit Agricole SA called the common currency’s drop against the dollar “the epitome of the global divergence trade that was revived by the coronavirus outbreak” -- with the health scare deepening the “perceived growth divide” between the U.S. and the euro zone.

The bank lowered its fourth-quarter euro prediction this week to $1.13 from $1.16, following similar action last week at JPMorgan Chase & Co. and RBC Capital Markets. Danske Bank A/S slashed its year-end projection all the way down to $1.08, from $1.15. The currency traded at $1.0861 Friday afternoon in London. The forecast cuts came after data showed Germany’s economy stagnated in late 2019.

It’s not just the economics. Political uncertainty has deepened in Germany, where Angela Merkel’s 15-year tenure as chancellor is due to end in a succession battle. Ireland’s general election was dominated by Sinn Fein, from the radical left. It all adds to the sense of unease, fanning doubts that euro-area governments will heed the European Central Bank’s call for fiscal stimulus to take over from monetary policy to boost growth. That has stoked talk of further easing at the ECB.

And then there’s Brexit, which remains as much a threat for the euro as for the pound. While the U.K. has left the European Union, a failure to put a new trade deal in place by year-end would raise serious economic risks for both sides.

The global gloom has also burnished the appeal of haven assets -- including the dollar -- and highlights a concentration of risks in the euro area. That’s fueled the euro’s slide and powered a rally in the Swiss franc.

The single currency’s drop is running faster than the dollar’s rise. The correlation between the pair and a Bloomberg index that tracks the greenback is weakening, a sign that the story is more one of euro weakness than dollar strength.

The euro also remains an asset that many are keen to borrow, but few want to own. Its popularity in funding carry trades -- where investors use loans in currencies with low interest rates to buy higher-yielding alternatives -- also leaves it exposed.

Options indicators are pointing to more weakness. Bets that would pay out on a euro drop below $1.08 are rising, according to data from the Depository Trust & Clearing Corporation. Such options represent one fourth of the total notional value of euro vanilla puts traded this month, while 5% are targeting a deeper slump to $1.05.

Willem Klijnstra, strategist at Legal & General Investment Management, points out that while the outlook has turned bleak, the sheer size of the drop creates an attractive valuation case for the euro, adding that it “will probably be enough for us to consider a long euro position against the dollar, despite the negative carry.”

While a weaker currency would be helpful in the long run, investor patience is wearing thin after a series of false dawns for the euro.

“The only way to make it work long term is for many economies to undergo severe and draconian structural adjustments and internal devaluation. But the social economic and political cost of doing so is untenable,” said Aberdeen Standard’s Athey, who predicts near-term support for the euro to kick in at $1.05. “But eventually it will go lower than that and through parity with the dollar.”

--With assistance from Greg Ritchie and Vassilis Karamanis.

To contact the reporter on this story: Michael Hunter in London at mhunter72@bloomberg.net