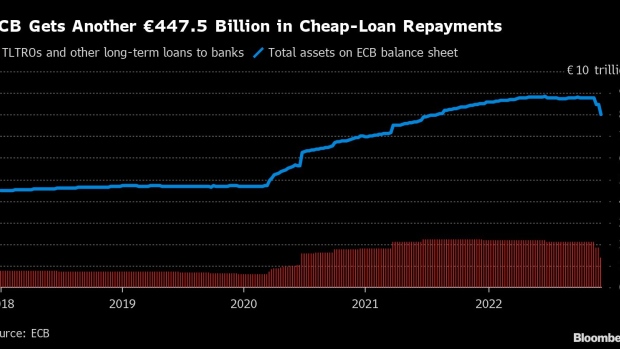 (Bloomberg) -- Euro-area banks are returning another €447.5 billion ($472 billion) in cheap loans to the European Central Bank after officials toughened the terms of the program to help fight double-digit inflation.

The repayment will shrink the outstanding amount of so-called TLTRO loans, which were used during the pandemic to keep credit flowing to households and businesses, by about 25%.

The median forecast in a Bloomberg poll of economists was for €333 billion to be given back this month, though the range of predictions was wide. In November, €296 billion was returned.

The repayment, announced Friday by the ECB, was the second such opportunity for banks after officials decided in October to better align the program with rising interest rates by making the funding pricier.

Another €51.9 billion of TLTROs will mature before the end of the year, bringing the overall tally of outstanding cheap loans to about €1.3 trillion, Executive Board member Isabel Schnabel said via Twitter on Friday.

The premium on two-year swap rates over German cash counterparts — a measure of collateral scarcity — dropped 4 basis points to 74 basis points after the announcement, the lowest since Nov. 16.

Lenders may have had regulatory incentives — like reducing levies based on the size of their balance sheet — to return more funding this month, Barclays economists Ludovico Sapio and Paola Sabbione said in a report to clients before today’s announcement.

The Governing Council is expected to raise rates by 50 basis points when it meets next Thursday — bringing the deposit rate to 2%. It will also discuss a gradual reduction of its €5 trillion bond portfolio — another key way to shrink the ECB’s balance sheet alongside the cheap-loan repayments.

Banks will have further options for reimbursement in each of the next three months, and then on a quarterly basis.

--With assistance from James Hirai and Harumi Ichikura.

(Update with markets in sixth paragraph)