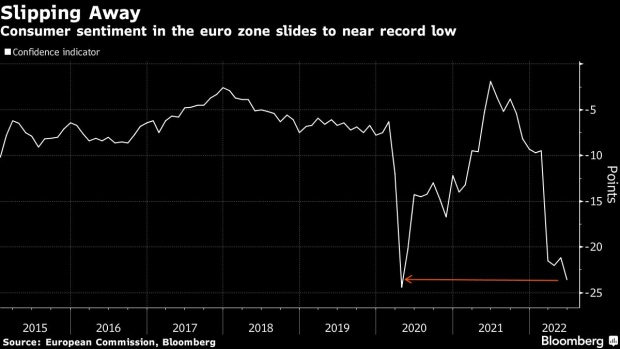 Pedestrians and shoppers walk along Regent Street in London. , Bloomberg

(Bloomberg) -- Euro-area consumer confidence approached its lowest level since the early months of the pandemic as soaring inflation weighs on purchasing power and households fret about the knock-on effects of Russia’s war in Ukraine.

A monthly gauge from the European Commission showed a reading of -23.6 in June -- down from -21.1 in May and worse than the -20.5 median estimate in a Bloomberg survey of economists.

That’s just short of the all-time low set in April 2020 as Covid-19 swept across the continent.

The war on the currency bloc’s border and renewed strains on global supply chains have hit the euro-zone hard. Economic expansion is expected to slow later this year -- with some banks even warning of a possible recession -- while inflation has accelerated to more than four times the European Central Bank’s 2% goal.

Consumer spending has held up so far, as a binge on vacations following two years of coronavirus lockdowns offsets cutbacks elsewhere. There’s skepticism that the impulse can last, however, especially as the ECB gears up to raise interest rates for the first time in more than a decade.