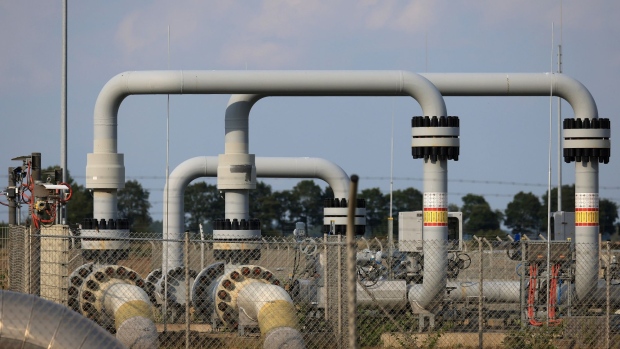 Pipework at a gas compressor station on the Bunde-Etzel pipeline (BEP) in Etzel Germany, on Wednesday, Sept. 7, 2022. The European Union is throwing together a series of radical plans to tame runaway energy prices and keep the lights on across the continent, but governments across the region are going to need to find common ground and fast. Photographer: Krisztian Bocsi/Bloomberg , Bloomberg

(Bloomberg) -- Euro-area consumer confidence slumped to its lowest level on record as households brace for a winter energy crunch and a further acceleration of already soaring inflation.

A monthly gauge from the European Commission fell to -28.8 in September, according to data released on Thursday. That compared with analyst estimates for a decline to -25.5.

Economists say it’s almost inevitable that the 19-nation currency bloc will enter a recession in the coming months, with Russia throttling gas supplies and prices soaring. Governments across the region are rushing to devise support measures to protect more vulnerable groups. But their firepower is being stretched by parallel efforts to rescue struggling companies, such as Germany’s nationalization of gas importer Uniper SE.

Deutsche Bank is among institutions that now see a much deeper recession on the horizon after Russia slashed energy supplies in retaliation for sanctions over its war in Ukraine. Economists there predict an overall annual contraction of 2.2% next year.

European Central Bank officials, meanwhile, say they will forge ahead with interest-rate increases after an unusually large three-quarter-point move in September. The latest inflation data for the euro zone is due to be published next week and will provide a crucial input for their upcoming decisions.

“A looming downturn would have a dampening effect on inflation,” ECB Executive Board member Isabel Schnabel said in an interview published on Thursday. “Of course, we take this into account when calibrating our monetary policy. However, the starting point of interest rates is very low, so it is clear that we need to continue raising rates.”