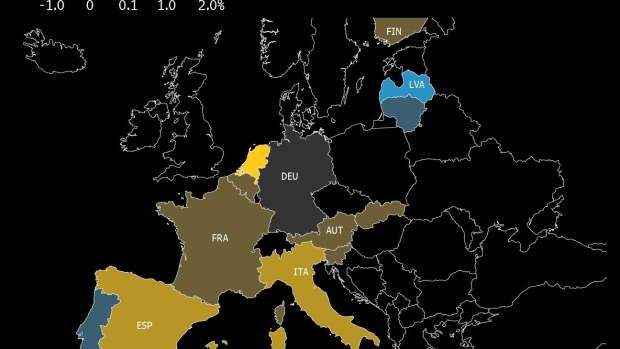 Workers talk between sections of wind towers at the CS Wind ASM offshore tower plant at the Port of Aveiro in Aveiro, Portugal, on Thursday, Aug. 4, 2022. Renewables are now among the cheapest forms of electricity — especially after an energy crunch and the Ukraine war bolstered gas, oil and coal prices — but still face challenges over how to store power when there’s a lack of sun or wind. Photographer: Eduardo Leal/Bloomberg , Bloomberg

The euro-area economy grew slightly less than initially estimated in the second quarter as signs continue to emerge that momentum is unraveling.

Output rose 0.6% from the previous three months between April and June, compared with a preliminary reading of 0.7%, Eurostat said Wednesday. Employment, meanwhile, climbed 0.3% during that period.

While the data still suggest Europe’s economy was on a relatively firm footing coming into the summer, analysts worry that energy shortages will drive record inflation higher still, tipping the continent into a recession. A downturn lasting two quarters is now more likely than not, according to a Bloomberg survey, which puts the probability at 60%.

Inflation is expected to average almost 8% in 2022 -- about four times the European Central Bank’s goal. Officials have stressed the importance of reacting forcefully to prevent expectations of higher inflation from becoming entrenched, though some economists question how far interest rates can be lifted if there’s a recession.