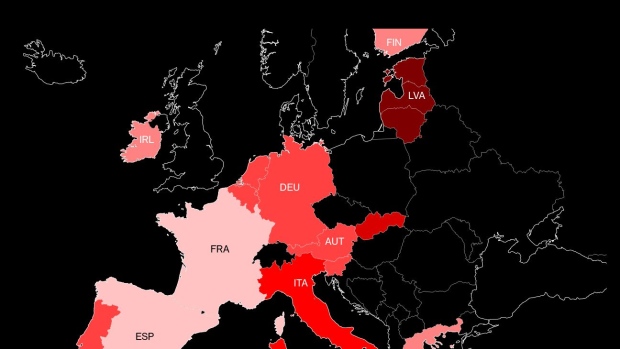 (Bloomberg) -- Euro-zone inflation slowed for the first time in 1 1/2 years, offering a glimmer of hope to the European Central Bank in its struggle to quell the worst consumer-price shock in a generation.

The reading for November was 10%, Eurostat said Wednesday, less than the 10.4% median estimate of economists surveyed by Bloomberg. The drop, from 10.6% in October, was the biggest since 2020 and was thanks to slower advances in energy and services costs, even as food prices grew more quickly.

ECB officials have highlighted the data as crucial for their judgment over whether to raise interest rates by 75 basis points for a third straight time -- an outcome that may now be less probable. Policy makers are likely to study the report at a scheduled meeting on Wednesday, their final gathering before the Dec. 15 decision.

While only a single month of data, the flickering prospect of weakening price pressures will bring relief to the ECB after the frustration of half a year of figures repeatedly exceeding economist forecasts. It coincides with US statistics from October that went in the same direction, emboldening some Federal Reserve officials to consider a downshift in the pace of rate hikes.

“This will be welcome news for the ECB and reinforces our view that the pace of rate hikes will slow in December to 50 basis points from 75. Any sense of relief will be tempered by the fact that underlying pressures remain way too strong.”

The euro-zone inflation rate remained in double digits for a second month, and officials this week sought to warn of possible false dawns. ECB President Christine Lagarde told the European Parliament on Monday that “it would surprise me” if price growth has peaked.

Her deputy, Luis de Guindos, lamented earlier this month about prior “negative surprises.” On Tuesday, he emphasized that “the signal we have to keep following is the evolution of underlying inflation.”

The vice president may have been referring to the so-called core measure, which strips out volatile elements such as food and energy. That gauge was unchanged at a record 5%, Wednesday’s report showed.

The numbers follow a string of weaker consumer-price readings from around the euro region this week. Inflation moderated in Germany, Italy, Spain and the Netherlands. In France, it unexpectedly held steady. Price growth only accelerated in three euro-area nations.

ECB officials will use the data both as an indicator of price pressures and as an input for new quarterly economic forecasts. While showing the path for inflation, the projections are also likely to reveal how the cost shock inflicted on the region is crushing growth, with a recession now probably under way.

Policy makers have raised rates by 200 basis points since July, and must now decide whether to deliver another 75 basis-point move or opt for a smaller step.

Whether a lower inflation number will be enough to nudge the ECB toward only a half-point increase isn’t clear. Last week, Executive Board member Isabel Schnabel already sought to cast doubt on the prospect of slower tightening.

“Incoming data so far suggest that the room for slowing down the pace of interest rate adjustments remains limited,” she said.