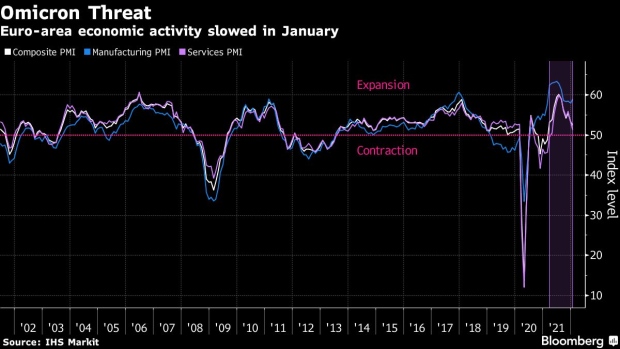 Euro-area economic activity increased at its slowest pace in almost a year as infections of the coronavirus’s omicron strain ripped through the services industry.

While supply disruptions eased somewhat for manufacturers, a composite gauge for both sectors fell for a second month, to 52.4 in January from 53.3 in December, according to a survey of purchasing managers by IHS Markit published Monday.

Areas to suffer the most from the highly transmissible Covid-19 variant included tourism, travel and recreation. But, despite the disease boosting staff absences, many factories managed to lift output as shipping delays and component shortages abated.

“The omicron wave has led to yet another steep drop in spending on many consumer-facing services,” Chris Williamson, chief business economist at IHS Markit, said in a statement. “However, so far the overall impact on the wider economy appears relatively muted, and most encouraging is the further easing of manufacturing supply-chain delays despite the renewed virus wave.”

While it’s putting a dent in Europe’s pandemic rebound, policy makers at the European Central Bank don’t see omicron derailing the recovery altogether and have mapped out an exit from crisis-era stimulus. Business activity picked up in January in Germany, the continent’s largest economy, according to IHS Markit.

The bigger question right now is the path for inflation, which has surged to a record 5% in the euro region. ECB officials led by President Christine Lagarde have said repeatedly that price growth will ease this year, making an interest-rate hike unnecessary.

Some, however, question that outlook, with Monday’s data bolstering the arguments of those hawks.

“Prices for goods and services are rising at a joint-record rate as increasing wages and energy costs offset the easing in producers’ raw material prices, dashing hopes of any imminent cooling of inflationary pressures,” Williamson said.