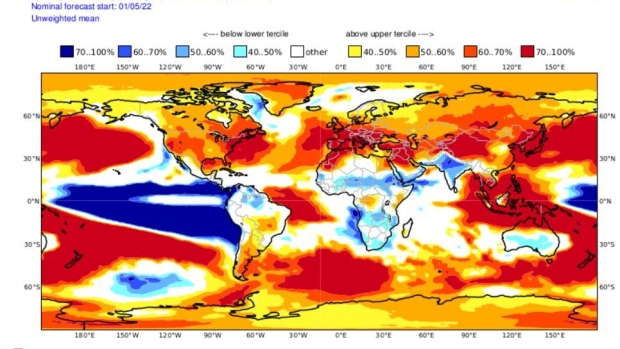 Residents watch the wildfire while waiting to support firefighters outside the village of Kamatriades, on Evia island, Greece, on Monday, Aug. 9, 2021. Thousands of residents were evacuated from the Greek island of Evia by boat after wildfires hit Greece’s second biggest island. , Bloomberg

(Bloomberg) -- Europe and parts of the US are set for a sweltering and dry summer this year, posing risks for crops and boosting demand for energy for cooling at a time when prices of commodities are already running high.

Scientists at the Copernicus Climate Change Service, who published their seasonal outlook on Friday, said hotter and drier weather is highly likely across key agricultural regions in the European Union. It could bring drought conditions for farmers that are already battling the impacts of climate change.

The scientists said there’s a 70% to 100% probability that temperatures across the northeastern US, Spain, France and Italy will be well above average from June to August. At the same time, the chance of below-normal rainfall across swathes of central Europe, France, Spain and the US northwest was more than 50%, the Copernicus team said.

Their model brings together data from scientists in the UK, France, Germany, Italy and the US. The EU program uses billions of measurements from satellites, ships, aircraft and weather stations around the world for its monthly and seasonal forecasts.

Persistent drought has threatened to stress production of crops like wheat and corn, just as Russia’s war in Ukraine threatens to curtail shipments.. The models developed by Copernicus are intended to help businesses and governments plan for and potentially mitigate weather-related damages.