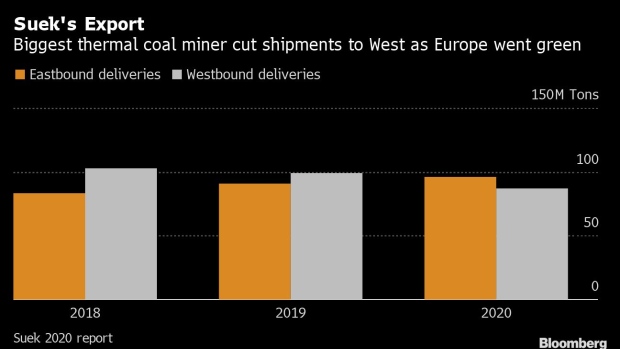 Coal in freight wagons ahead of shipping at Tomusinskaya railway station near Mezhdurechensk, Russia, on Monday, July 19, 2021. Russia’s government is betting that coal consumption will continue to rise in big Asian markets like China even as it dries up elsewhere. Photographer: Andrey Rudakov/Bloomberg , Bloomberg

(Bloomberg) -- It’s not just extra natural gas that Europe’s struggling energy markets are finding tough to get from Russia.

Power producers in the continent are being forced to ask Russia for more coal to ease an energy crunch with winter approaching and record-high gas prices denting profitability, according to officials at two Russian coal companies. But they may be left stranded as any increase in exports from the country won’t be substantial, they said.

Having largely turned away from coal for years in an attempt to green its electricity generation, Europe is now in a conundrum. The region’s gas storage sites are only partially full, liquefied natural gas suppliers are favoring Asia, and intermittent renewables aren’t able to fully meet demand. With the winter heating season approaching, the dependence on Russia to keep the lights on is growing.

“If all the European utilities switch to coal, it will result in a huge spike in coal demand that Russia alone cannot provide for on such a short notice,” said Natasha Tyrina, a principal research analyst at Wood Mackenzie Ltd. in Houston. “That would need supply from other countries as well, from the U.S. for example, but the situation there is similar to everywhere else.”

Europe’s plight highlights the energy supply crisis that’s gripping the world as countries emerge from the pandemic. Demand for oil, gas and electricity is surging, while coal is making a comeback, driven in part by China. The fuel’s resurgence, and countries’ recent dependence on it to keep their economies running, makes critical climate talks much more complicated with the COP26 meeting just weeks away.

European utilities are in desperate need to get their hands on more coal, a strategist at one European utility said, asking not to be identified. But Russia, the world’s third-biggest exporter of the fuel, is mainly targeting sales to the largest buyers in Asia.

“Russia has been cutting coal exports to Europe for years as the European Union was closing thermal coal power stations,” said Kirill Chuyko, head of research at BCS Global Markets. It’ll be hard to re-route to Europe “as there are existing contracts with Asian clients. On top of it, transportation capacity is anyway limited.”

Also complicating matters is Europe’s stringent environmental standards for burning coal, making it much more difficult and time-consuming for Russia to prepare supplies that meet the quality requirements, the officials at the country’s coal companies said.

Russian supplies to Asia could pick up further in the fourth quarter once rail availability improves, WoodMac’s Tyrina said. Maintenance works will have ended, and there will be less competition from other traffic, she said. The end to the summer will lower passenger traffic toward the Black Sea, home to resorts but also major export ports.

There are fewer transport bottlenecks to the west, with about 35% to 45% of thermal coal supply typically exported through the northern and southern ports, including to Europe, according to the data from companies. The infrastructure can handle about 133 million tons of coal toward the west this year, said Kirill Nikoda, deputy head of the center for economic forecasting an Gazprombank. That’s almost 40 million tons higher than capacity in 2020, following several expansion projects, he said.

Still, coal exports, including for power generation, to Europe are forecast to be flat this year at about 48 million tons, a spokeswoman for the Energy Ministry said. It edged up 2.4% to 22.5 million tons in the first half of the year.

Rising demand from Europe could potentially lure more Russian coal, “but the question is how much additional supply rail infrastructure would allow,” Tyrina said.