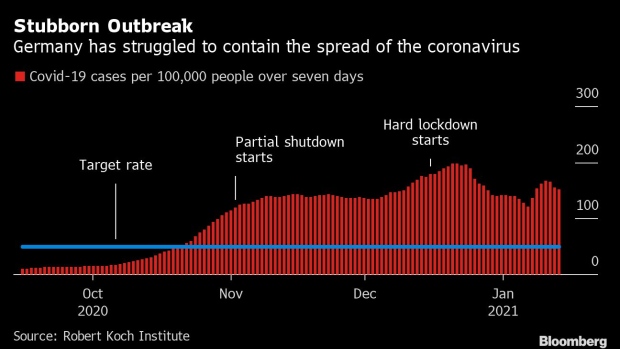 A city worker passes along a passageway in the La Defense business district in Paris, France, on Monday, Jan. 4, 2021. France is doing all it can to avoid a third Covid-19 lockdown, which would further hurt an economy already battered by the coronavirus pandemic, according to Budget Minister Olivier Dussopt. , Bloomberg

(Bloomberg) -- European governments prepared a raft of tougher measures to fight the Covid-19 pandemic, putting further strain on economies and political leaders as they seek a faster pace of vaccinations.

France expanded a daily 12-hour curfew nationwide starting Saturday and German Chancellor Angela Merkel is leading toward a tougher lockdown, amid concern that a more-contagious coronavirus variant may cause infections to spiral out of control.

Vaccination is “the utmost priority” to get out of the crisis, French Prime Minister Jean Castex said. “But we must all be patient and responsible because it will take months before vaccination can sufficiently protect us all.”

Evidence is growing that another wave of the virus is sweeping across the region. New cases in Spain rose to a record on Thursday, more than doubling from Monday, and German infections topped 2 million.

Merkel is seeking to discuss additional curbs with the premiers of Germany’s 16 state governments next week. That would accelerate talks originally planned for Jan. 25, according to a person who participated in a phone call between Merkel and leaders of her Christian Democratic Union party on Thursday.

Further restrictions may include curfews and closing schools, Bild reported on Thursday. The meeting with regional leaders could be held on Jan. 20, according to the newspaper.

Ireland’s cases rose to about 8,000 a day, one of the worst coronavirus outbreaks in the world, from about 300, in a surge partly linked to the new strain. Scientists estimate that about 45% of Irish cases are linked to the new variant.

In Spain, regions are toughening rules for gatherings, traveling and restaurant opening times after relaxing restrictions to allow for family meetings during the Christmas season.

“We are facing a wall,” said Francisco Igea, spokesman of the Castilla y Leon region, where the number of cases per 100,000 people has increased fourfold in the past two weeks. The region is expecting restrictions of movement will remain at least until May.

In France, cafes, bars and restaurants remained closed, along with cinemas, theaters and gyms. A 6 p.m. to 6 a.m. curfew in place across much of eastern France will become nationwide from Saturday, said Castex, who also raised the prospect of shuttering the part of the economy that remain open.

“If we see a strong deterioration of the epidemic in coming days, we would have to decide, without delay, on a new lockdown,” Castex said.