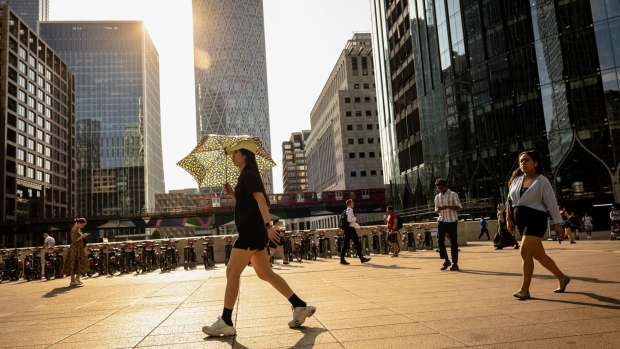 A pedestrian uses a umbrella to protect herself from the sun, at Canary Wharf, during a heatwave in London, UK, on Monday, July 18, 2022. Extreme heat could lead to power outages, canceled flights and may be a danger to life while the so-called Red Extreme warning is in place across parts of southern England on Monday and Tuesday. Photographer: Jose Sarmento Matos/Bloomberg , Bloomberg

Sizzling temperatures are expected to hit the UK, Germany and France -- reaching almost 36 degrees Celsius (96.8 Fahrenheit) on Friday -- according to Maxar Technologies LLC. The heat will boost demand for cooling, aggravating already dry conditions that hurt crops and force limits on water use.

Extreme heat has already taken its toll on the continent, with France registering the driest July on record and England the driest in almost 90 years, underscoring the impact that a warming climate is having on vital infrastructure. Water levels on the Rhine River, a vital artery for the transport of commodities and industrial goods, are so low that trade is at risk of coming to a halt on some sections of the waterway.

The weather has sparked fires near London, triggered warnings that railway lines could buckle, and forced power stations to operate at low levels to prevent overheating. In France, regulators granted Electricite de France SA a temporary waiver for five nuclear plants to discharge hot water into rivers that may breach environmental standards as the nation struggles with an energy crisis.

Although temperatures this aren’t likely to reach the record breaking levels set in July, the heat wave comes amid a historic energy-supply crunch as Russia tightens its grip on natural gas flows to the region. The crisis has contributed to soaring inflation, threatening to tip some of Europe’s largest economies into recession. Power prices in Germany and France have surged to records in recent days.

The heat is forecast to peak at 31.5 degrees Celsius in London by Friday and 32.5 degrees in Frankfurt, according to Maxar.