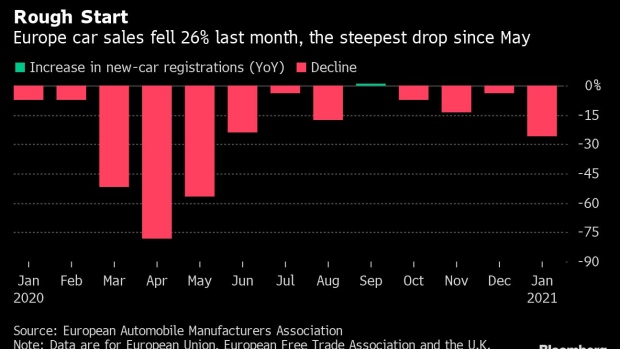 An employee wearing a protective face mask stands at a service desk on the showroom floor of Casa Seat in Barcelona, Spain, on Wednesday, Sept. 23, 2020. European auto stocks are emerging as a surprise winner as the coronavirus pandemic grinds on, with some analysts saying the outbreak is causing changes in consumer behavior that bode well for the industry and for share prices. Photographer: Angel Garcia/Bloomberg , Bloomberg

New-vehicle registrations plunged 26% to 842,835, the European Automobile Manufacturers’ Association said Wednesday, cutting short a reprieve of smaller declines toward the end of last year. Spain led the drops among major markets with a 52% fall, while sales in Germany fell by almost a third.

Shuttered showrooms and hesitant consumers are plaguing automakers which also are fighting production outages due to a worldwide shortage of semiconductors. Many manufacturers’ earnings are being rescued by resurgent demand from China, with Volkswagen AG and BMW AG among those posting better-than-expected preliminary earnings.

“The European auto-sales outlook for the first half remains uncertain,” Bloomberg Intelligence analyst Michael Dean said in a note Tuesday. Expectations for a near-doubling in operating profit across the region’s carmakers this year are increasingly doubtful, he said.

Among the continent’s biggest carmakers, sales for VW fell 28% while Renault SA’s were down 23%. Luxury automakers fared better, with registrations dropping 18% for Daimler AG and 17% for BMW.