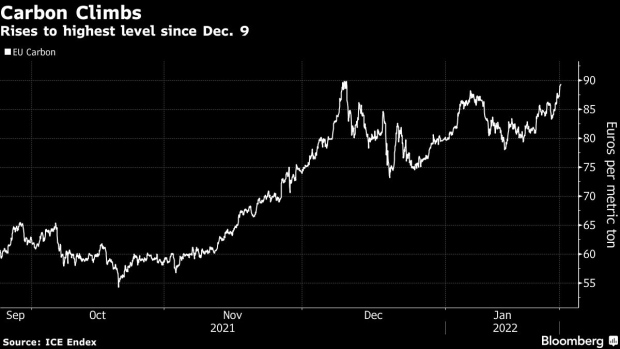 High voltage electricity power lines near cooling towers of the Jaenschwalde lignite-fired power station near Peitz, Germany, on Thursday, Oct. 28, 2021. The G-20 is meeting in Rome this weekend right before COP26 in Glasgow, the United Nations gathering that aims to set specific goals to wean nations off coal and other noxious substances for good. Photographer: Krisztian Bocsi/Bloomberg , Bloomberg

(Bloomberg) -- The cost of pollution in Europe hit an almost seven-week high amid concern that potential conflict in Ukraine could send the continent’s gas prices surging, making dirtier fuels cheaper to burn.

European Union emissions permits are rising toward a record reached in December, as higher gas prices drive the switch to more carbon-intensive fuels such as coal and lignite. Fears over expensive gas can push up demand for pollution permits as generators see dirtier fuels as more profitable.

“Support to carbon has come about in part from the impact of the regional gas-supply crisis,” Inspired Energy said in a note. “Such strong gains have led to unfavorable power fuel switching dynamics,” the consultant said, adding that coal is set to be cheaper to cover any demand shortfall through to December 2023.

Relief came to near-term electricity markets on signals that gas supplies to Europe were increasing. Month-ahead German power, a benchmark for the continent, fell as much as 9% in early Wednesday trading after additional Russian gas flows were booked to Europe via Ukraine. Gas is a major driver of European electricity prices because it fires many of the continent’s power stations.

French power for February also dropped as much as 5.1%, even as strikes cut as much as 5.5 gigawatts of capacity. Intraday prices jumped on Tuesday after an outage on IFA-1 interconnector was extended.