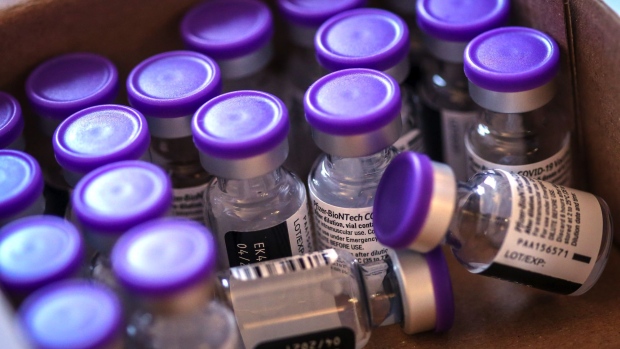 (Bloomberg) -- The European Union finalized an agreement with Pfizer Inc. and BioNTech SE for 200 million more doses of their Covid-19 vaccine, locking in a second-quarter supply boost as countries struggle to speed up their immunization drives.

This second order significantly increases the number of doses available from the two companies for the bloc’s 27 member states. The contract includes a firm order for 200 million shots, with an option to request an additional 100 million, which could double the EU’s overall supply from the companies.

As many as 75 million doses from the order will be shipped in the second quarter, European Commission President Ursula von der Leyen said when the deal was first announced in January.

EU countries are far behind the U.S. and U.K. in the race to vaccinate as many people as possible, even as faster-spreading variants of the virus gain a stronger foothold on the continent.

The commission is also seeking to boost its stock of vaccines from Moderna Inc., which, like Pfizer-BioNTech, has a shot based on messenger RNA technology. Unlike more conventional vaccines, the mRNA shots can be modified within weeks if necessary to protect against mutant versions of the virus.