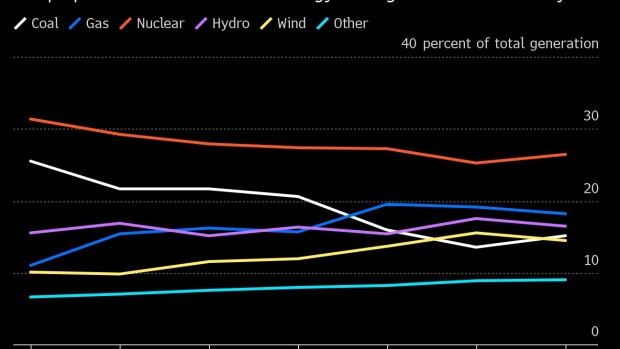 Electricity produced from coal and lignite jumped 17% from the previous year, the first increase since 2017, while overall generation rose by only 5%, according to EnAppSys Ltd., a U.K.-based energy consultant. Power from natural gas and renewables posted modest gains, with wind output dropping from its 2020 peak.

Coal’s resurgence threatens to slow Europe’s efforts to wean itself off dirtier energy sources as it tries to hit ambitious climate targets. At the same time, the continent is battling an energy squeeze driven by a shortage of natural gas, which has forced up power prices and boosted the attraction of burning coal.

Overall, coal and lignite accounted for 15% of the continent’s electricity generation last year, while gas accounted for 18%, EnAppSys said in a report. Total power generated from gas saw only a slight increase of 0.1%, with demand muted by the record-high cost for the fuel.

Nuclear still dominated Europe’s fuel mix last year, accounting for 27% of the region’s energy sources. Total generation from renewables, including wind and hydro, made up 40%.