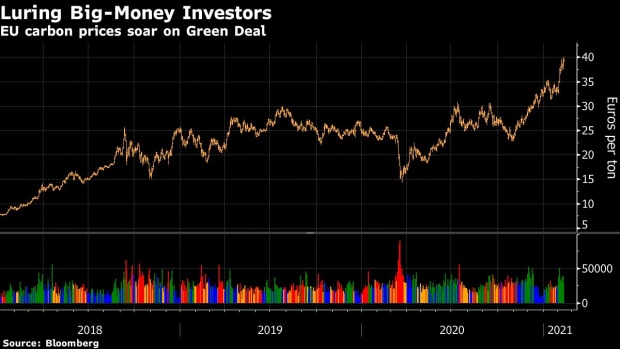 Bulldozers arrange stores of coking coal in a storage dump at a mine in Ruda Slaska, Poland. , Bloomberg

(Bloomberg) -- The European Union is considering curbs on speculation in the world’s biggest carbon market where record prices have lured hedge funds in search of profits.

EU emission permits jumped to an all-time high of 40.12 euros on Thursday, extending their gains to about 70% over the past year. That gain, in part, has been down to large-scale investors speculating in the market. Europe’s cap-and-trade program, started in 2005, is the region’s key policy tool to cut pollution.

The European Commission, the EU’s regulatory arm, could introduce a limit on the number of CO2 allowances that can be held by investors in a central registry of the Emissions Trading System, according to people with knowledge of the matter. Doing this would prevent financial investors holding too much sway in the market.

That could be done during a revision of the Markets in Financial Instruments Directive planned later this year, the people said.

Putting a price on carbon incentivizes energy intensive industries to switch to less polluting technologies. Should prices jump too quickly though, it threatens a smooth transition to industry powered by clean energy.

Europe, which wants to become climate-neutral by 2050 under its ambitious Green Deal strategy, is currently drafting laws to implement a tougher carbon-cut goal for 2030. The new regulations are set to strengthen the EU ETS, boosting the scarcity of permits. Speculation by financial investors risks putting more strain on companies and could fuel opposition against speeding up the environmental overhaul.

The 11,000 energy-using facilities covered by the market can buy allowances at government auctions or in the market, either directly or through intermediaries. Large-scale investors like hedge funds are also allowed to buy and sell permits, increasing liquidity.

All market players must have an account in the EU carbon market registry, an online database which keeps track of the ownership of allowances. While currently there are no holding limits on excess permits in the European registry, such curbs exist in the Swiss carbon market, which is linked to the EU ETS. In California’s cap-and-trade, holding limits are linked to the pollution cap and decline each year.

The speculative buying is adding to increased demand from emitters amid temporary supply shortage of allowances. Government auctions of permits were also delayed until the end of January, keeping prices buoyant.

The distribution of free permits for companies will also be postponed from the end-of-February deadline. The EC said in November it planned to make a decision on the number of permits to be handed out to companies in the second quarter, with national government officials expecting transfer of allowances in June at the earliest.

The EU ETS entered into a new trading period this year, the so-called Phase 4, and allowances issued from 2021 onwards cannot be used for covering 2020 emissions. Some companies relied on swapping Phase 4 permits for allowances issued in the eight-year-long Phase 3 to have enough certificates before the end-April compliance deadline for last year.

Those emitters that have surplus permits are reluctant to sell and many prefer to keep their allowances for the coming years, when prices are expected to rise further and emission limits will become tougher under the Green Deal.