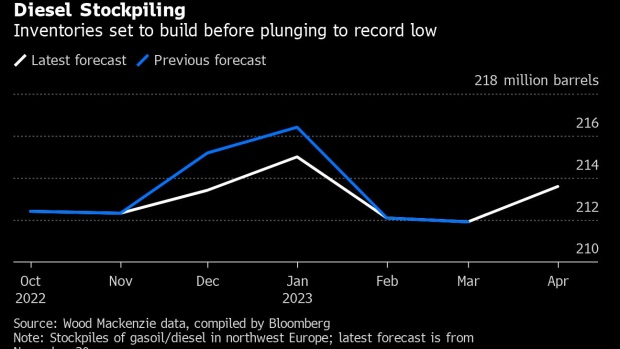 (Bloomberg) -- Stockpiles of diesel-type fuel in northwest Europe are set to rise — though by slightly less than previously expected — ahead of an upcoming ban on Russian supplies.

Inventories will reach 215 million barrels before plunging early next year to their lowest in data going back to 2011, according to a forecast from Wood Mackenzie Ltd. European Union sanctions will all but cut off seaborne deliveries from Russia — currently the bloc’s single biggest external supplier — from early February.

The increases in December and January are smaller than previously forecast, due to a downward revision to this month’s refinery processing because of deteriorating margins.

While it’s normal for Europe’s diesel stockpiles to rise during winter, the upcoming EU sanctions make this season’s builds particularly important. Once Russian barrels are gone, the bloc will have to find more fuel from other sources. Stockpiles offer a useful buffer as new supply chains develop.

The economics of importing diesel from east of Egypt’s Suez Canal have improved, helped by weaker Asian prices, according to James Burleigh, principal analyst at Wood Mackenzie.

March is currently forecast to be the tightest month because it follows both the embargo on Russia and northwest Europe’s seasonal demand peak, he said. “After that, the tightness will ease as trade flows re-balance and demand wanes into the summer months.”

Refinery processing in northwest Europe rose to 6.1 million barrels a day in November, though was limited by the delayed return of some French plants after strike action and the shutdown of crude distillation units at BP Plc’s giant Rotterdam refinery. It’s forecast to reach 6.16 million barrels a day this month.