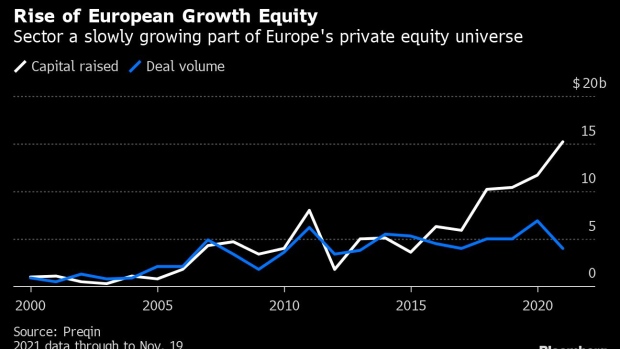 (Bloomberg) -- Just over a year in Europe has left Marc Brown with a one very firm conviction about the landscape for investing in the continent’s young, fast-growing technology firms.

Brown, who moved from Microsoft Corp. a year ago to join Swedish private equity firm EQT AB as head of its growth-advisory team, says the money and talent that are pouring into the Europe’s tech sector partly as Covid-19 drives new ideas is putting the continent’s growth-equity investing industry on course to catch the U.S.

It has “completely changed over the past two to three years,” he said in an interview. An “institutional-investor base has given entrepreneurs a real sense they can stay in Europe. You don’t have to move immediately to the U.S.” to start a business.

Which is why EQT, as it expands into new asset classes in the hunt for fresh money pools, is on the lookout for disruptors -- companies that may one day change or displace existing operators in the tech space. And though Brown writes checks of between 50 million euros ($57 million) and 200 million euros for minority stakes in such entities -- sitting a step below EQT’s typical buyout deal -- his mandate fits into the 70 billion-euro manager’s strategy.

The ripest targets for Brown, who is raising a debut 2 billion-euro fund, are companies with proven products, a strong management team, and are on the cusp of going international. He’s done six deals since his October 2020 move to EQT, buying stakes in entities including payment-services provider Mollie and music platform Epidemic Sound. On the list are disruptors in consumer and health care tech, he says, especially firms with “tailwinds” driven by digitalization as the big trend over the next 25 years.

Europe-focused growth-equity funds have raised more than $15 billion through to mid-November, 30% more than in all of 2020, though well below the more than $90 billion brought in by buyout firms, according to data from Preqin. Yet what has been a captive market for the likes of EQT, Bregal Milestone and Main Capital Partners is set to change. A recent poll of 200 institutional investors by Numis Corp. Plc found the majority planned their biggest private-markets allocation increases in growth equity.

The impact of the pandemic on how people live and work is helping drive that interest, given growth equity funds focus on technology, Jan Bruennler, co-founder of Bregal Milestone, said in an interview.

“If you look at many of the sectors that traditionally buyout houses have invested in -- healthcare, financial services, logistics -- each of these is being disrupted by technology in a really fundamental way,” he said.

Some of Bregal’s portfolio firms are growing between 50% and 100% a year, according to Bruennler. Recent deals include a 100 million-euro investment in digital-trust specialist InfoCert and $70 million in project-management software firm Teamwork.

It’s that type of growth that has made Brown so confident about the outlook.