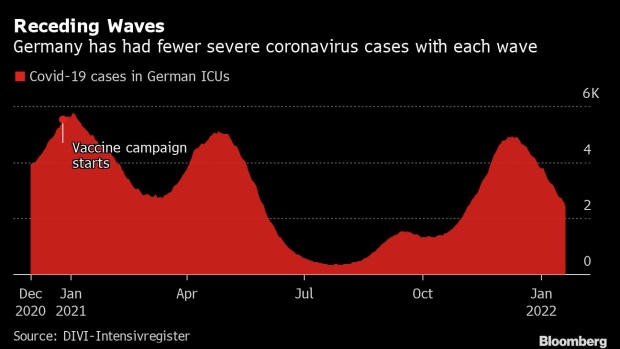 A souvenir store vendor wearing a protective mask on a near empty street near the Sacre Coeur church, in the Montmartre district of Paris, France, on Wednesday, Jan. 12, 2022. The pandemic in France has become a live political issue as authorities are struggling to contain the spread of the omicron variant and new infections hit a record. , Bloomberg

(Bloomberg) -- Europe is moving fast to exit the emergency coronavirus measures that have disrupted all aspects of life for the past two years, a recognition that the measures have been largely futile against the omicron variant.

Ireland is set to announce it’s dropping most pandemic restrictions on Friday, days after England outlined its own dramatic move to scrap rules forcing people to wear face masks in shops and ending mandatory isolation for positive cases.

France is also relaxing curbs even after reporting a record number of cases -- almost 470,000 -- in one day earlier this week.

The various announcements mark a growing sign that the road back to normal, or something resembling it, is well under way in Europe. But they also reflect the fact that omicron appears practically unstoppable, with the EU reporting more than 2.3 million cases on Thursday alone.

With omicron symptoms milder than the earlier delta variant and hospitalization rates in check, governments are struggling to justify imposing curbs on people and businesses. Some have already started talking about treating Covid-19 as an endemic, rather than a pandemic, as they move toward “living with the virus” policies.

The rollout of vaccines is key to that push. While inoculations haven’t been able to halt omicron infections, studies show they limit the chance of developing severe symptoms. European authorities have repeatedly pointed out that unvaccinated people make up the majority of intensive-care admissions from the virus.

In the effort to get as many people vaccinated as possible, Austria is pushing the hardest by making shots mandatory. On Thursday, lawmakers passed a law to enact the policy, which will include fines as high as 3,600 euro ($4,100).

In Ireland, government medical advisers proposed ending early closing times for bars and restaurants and dropping the need for vaccine passes to access indoor facilities such as gyms, local media including broadcaster RTE reported. Mask wearing, passes for international travel and self isolation for symptomatic people are likely to be the only rules that will remain in place.

France will lift the obligation to work from home at least three days a week, remove a requirement to wear a mask outdoors and scrap attendance limits for sports arenas and cultural venues.

Still, some health experts, including the World Health Organization, have warned against complacency, saying the virus could mutate again and people should continue to try to protect themselves from infection.

Germany looks likely to stick with its rules, when Chancellor Olaf Scholz meets with state leaders on Monday to discuss the pandemic.

Stephan Weil, the premier of the state of Lower Saxony, said the country should stick with its current measures, but doesn’t need stiffer controls despite soaring infections.

“We still need protective measures but we don’t need to return to total lockdown as the situation has changed, he said on ARD television on Friday.