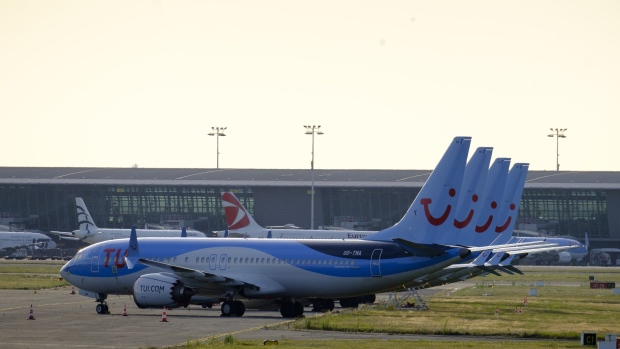 (Bloomberg) -- Europe’s top aviation regulator expects to take longer to get Boeing Co.’s 737 Max back into service than the projected timeline being taken by the U.S., which would likely push the grounded plane’s return into next year on the continent.

European Aviation Safety Agency chief Patrick Ky last week met with officials from the U.S. Federal Aviation Administration to say that the EASA decision will follow FAA’s, according to a person familiar with the talks. The person wasn’t authorized to speak about the meeting and asked not to be named.

Ky has made several statements in recent months indicating that Europe would likely trail the U.S. on the review of Boeing’s best-selling plane, though the tenor of his comments has ranged from optimism that it would closely mirror the FAA to indications it could take much longer.

He told Reuters that the his agency may follow the FAA by “a couple of weeks” and said any delay would “be due mostly to process or administrative technicalities.”

The FAA’s “first priority is safety, and we have set no time frame for when the work will be completed,” the agency said in an emailed statement. “Each government will make its own decision to return the aircraft to service based on a thorough safety assessment.”

Boeing’s projections earlier this year that fixes it is designing for the plane -- involved in two fatal crashes, off the coast of Indonesia and in Ethiopia, that killed 346 people -- would be completed by early in the fourth quarter have gradually slipped. While the timing remains fluid, the completion of the work and the FAA’s approval could be at the end of this year, or later if any glitches arise, said the person familiar with the process.

Boeing is altering a system that helped lead to the two crashes and is reworking the plane’s flight computer systems to make them more redundant following FAA’s safety review.

“We are committed to continuing to work closely with the FAA and global regulators on the safe return to service of the 737 Max,” Boeing said in an emailed statement on Monday night.