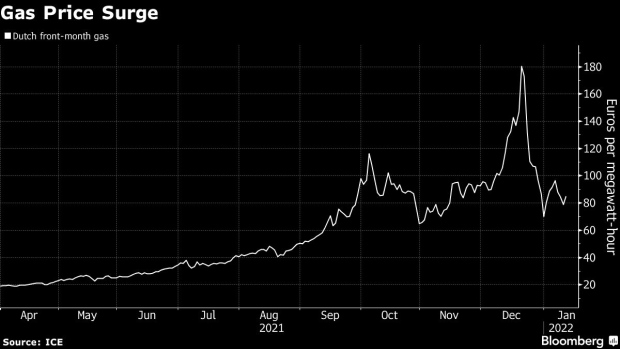 Colored lights illuminate the windows of a residential apartment block in the Friedrichshain district of Berlin, Germany, on Wednesday, Oct. 23, 2019. Berlin’s governing parties struck a deal to freeze rents for five years, marking one of the most radical plans to tackle spiraling housing costs in a major city and hitting the shares of major apartment owners. Photographer: Krisztian Bocsi/Bloomberg , Bloomberg

(Bloomberg) -- Europe will get stung this year with the biggest energy bill in a decade as hyperinflation in natural gas and power prices hits homes and factories across the continent, according to Citigroup Inc.

Using current forward prices, the region’s total primary energy bill will come in at about $1 trillion, the bank said in a report. While previous peaks were largely driven by surging oil prices, this time it’s about the cost of heating and powering everything from homes to transport and big industrial plants that will help reduce carbon emissions.

“It is gas and electricity that is becoming prohibitively expensive in Europe,” Citigroup analysts including Alastair Syme wrote. “Consumers and industry across the region are likely going to have to make some tough choices about their energy consumption.”

Europe is deep in an energy crunch with the lowest gas stocks for at least a decade. Benchmark prices for the fuel surged more than 250% last year, and tensions between the west and top supplier Russia are making traders the most jittery they have been for years. Lower wind speeds have also curbed output of renewable energy that the green revolution is built around.

Gas represents about 25% of Europe’s energy needs, compared with about 10% in Asia, Citigroup said. Because of importance as a power-plant fuel, surging gas prices feed into electricity rates too.

Some relief is at hand though, as governments are stepping up efforts to protect homes from the sky-high bills. Sweden on Wednesday followed nations from France to Italy as it announced a 6 billion kronor ($664 million) package to subsidize power consumers.