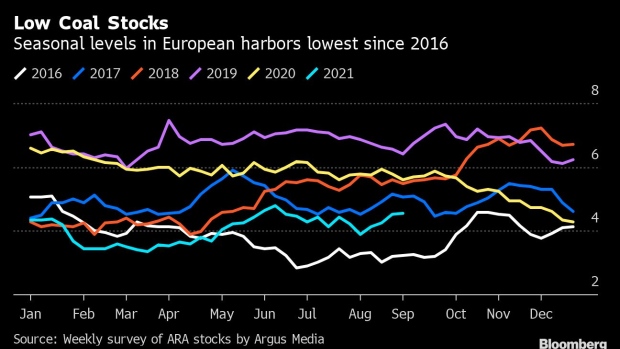 (Bloomberg) -- Europe is bracing for a tough winter as an energy crisis that’s been years in the making leaves the continent relying on the vagaries of the weather.

Faced with surging gas and electricity prices, countries from the U.K. to Germany will need to count on mild temperatures to get through the heating season. Europe is short of gas and coal and if the wind doesn’t blow, the worst-case scenario could play out: widespread blackouts that force businesses and factories to shut.

The unprecedented energy crunch has been brewing for years, with Europe growing increasingly dependent on intermittent sources of energy such as wind and solar while investments in fossil fuels declined. Environmental policy has also pushed some countries to shut their coal and nuclear fleets, reducing the number of power plants that could serve as back-up in times of shortages.

“It could get very ugly unless we act quickly to try to fill every inch of storage,” said Marco Alvera, chief executive officer of Italian energy infrastructure company Snam SpA. “You can survive a week without electricity, but you can’t survive without gas.”

Energy demand is rising from the U.S. to Europe and Asia as economies recover from the global pandemic, boosting industrial activity and fueling concerns about inflation. Prices are so high in Europe that two major fertilizer producers announced they were shutting plants or curtailing production in the region.

And it’s not just businesses. Governments are also concerned about the blow to households already contending with higher costs of everything from food to transport. As power and gas prices break records day after day, Spain, Italy, Greece and France are all stepping in to protect consumers from inflation.

“It will be expensive for consumers, it will be expensive for big energy users,” Dermot Nolan, a former chief executive officer of U.K. energy regulator Ofgem, said in a Bloomberg TV interview. “Electricity and gas prices are going to be higher at home than everybody would want and they are going to be higher than they have been for about 12 years.”

Europe’s gas prices have more than tripled this year as top supplier Russia has been curbing the additional deliveries the continent needs to refill its depleted storage sites after a cold winter last year. It’s been hard to get hold of alternative supplies, with North Sea fields undergoing heavy maintenance after pandemic-induced delays, and Asia scooping up cargoes of liquefied natural gas to meet rising demand there.

Higher gas prices boosted the cost of producing electricity as renewables faltered. Low wind speeds forced European utilities to burn expensive coal, depleting stockpiles of the dirtiest of fossil fuels. Energy policy also played a role, with the cost of polluting in the European Union surging more than 80% this year.

“Gas supply is short, coal supply is short and renewables aren’t going great, so we are now in this crazy situation,” said Dale Hazelton, head of thermal coal at Wood Mackenzie Ltd. “Coal companies just don’t have supply available, they can’t get the equipment, the manufacturers are backed up and they don’t really want to invest.”

European gas inventories are at their lowest level in more than a decade for this time of year. Gazprom PJSC’s CEO Alexey Miller said Europe will enter the winter in about a month without fully replenishing its buffer stockpiles. The Russian gas giant has been pushing to start its controversial Nord Stream 2 pipeline.

Europe now needs favorable weather. While forecasters say temperatures are unlikely to plunge below normal next month, expectations can always change. Similar weather forecasts did not materialize last year, resulting in a bitter temperatures that sent LNG prices in Asia to a record in January.

“It may happen again,” said Ogan Kose, a managing director at Accenture. “If we end up having a very cold winter in Asia as well as in Europe, then we may end up seeing a ridiculous spike in gas prices.”

In 2018, a deep freeze that became known as the Beast from the East took energy traders by surprise. This year there’s also a chance that a La Nina weather pattern would develop again. While the phenomenon can bring warm weather to Europe, it tends to send temperatures plummeting in Asia.

The U.S. Climate Prediction Center said there’s a 66% chance that a La Nina pattern will return some time from November to January. That could exacerbate the fight for LNG cargoes, as buyers from Japan to India start panic buying due to fears of competition with Europe.

“Unfortunately, the way the weather works, when it’s cold, it is cold: it’s cold for the U.S., it’s cold for Europe and then it gets cold for Asia,” said Snam’s Alvera, who is betting on hydrogen as the future for green energy markets.

Europe will need to curtail demand if the winter is cold, Goldman Sachs Group Inc. said, predicting the region will face blackouts. There are already signs of stress, with CF Industries Holdings Inc. shutting two fertilizer plants in the U.K. and Yara International ASA will have curtailed its ammonia production capacity by 40% by next week.

Shutdowns also risk hitting the food supply chain, which uses a byproduct of fertilizer production in everything from meat processing to beer. The sugar and starch industries are also affected, with France’s Tereos SCA and Roquette Freres SA warning of higher energy costs.

And it doesn’t stop there. Europe top copper producer Aurubis AG said higher prices will continue to squeeze margins through the rest of the year. Even chemicals giant BASF SE, which produces most of its power, said it has been unable to fully swerve the impact of record-breaking electricity prices.

Supplies are unlikely to improve significantly any time soon. Russia is facing an energy crunch of its own and Gazprom is directing its additional production to domestic inventories. Prices could stay high even if Europe ends up with a mild winter, said Fabian Ronningen, an analyst at energy consultant Rystad Energy AS.

“With natural gas prices already hitting record highs in Europe ahead of rising winter demand, prices could move even higher in the coming months,” said Stacey Morris, director of research at index provider Alerian in Dallas. “There is a potential it can get worse.”