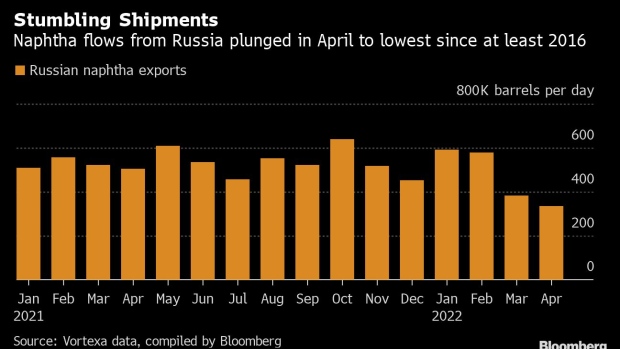 Traffic on the Champs Elysees, ahead of a national lockdown, in Paris, France, on Thursday, Oct. 29, 2020. Germany and France will clamp down on movement for at least a month, coming close to the stringent lockdowns in the spring as Europe seeks to regain control of the rapid spread of the coronavirus. , Bloomberg

(Bloomberg) -- The market for a key component in the production of gasoline is about to get tighter in Europe -- bad news for motorists already contending with soaring prices for the fuel.

Exports of naphtha from Russia, the world’s top supplier, have shriveled to a multiyear low as countries and companies shun the nation’s oil following its invasion of Ukraine.

The petroleum product is used to make goods from fuel to plastics. Now, as the driving season approaches and petrochemical plants return from maintenance, demand for naphtha is about to kick into higher gear.

It’s another example of how the war and the recovery from the pandemic are straining commodity flows. And it’s set to get more complicated as China grapples with lockdowns and the European Union plans a ban on Russian crude and fuel imports this year.

“Ultimately, there is some risk from a Russian shortfall in naphtha,” said Joseph McDonnell, an oil products analyst at Energy Aspects Ltd.

“Russian barrels will continue to flow into Europe,” he added. “But where buyers have self-sanctioned they will turn to the US, Algeria, Norway and other incremental suppliers to meet their buying requirements, and total Russian supply into Europe is a big gap to fill.”

Russian exports of naphtha plunged in April to about 333,000 barrels a day, according to Bloomberg calculations using data from energy-analytics firm Vortexa Ltd. That’s the lowest since at least the beginning of 2016.

Last month, Europe replaced Asia as the top destination for the Russian feedstock, even as many companies in the EU avoided supplies from the country. Shipments to South Korea, the usual top purchaser, came to a halt as buyers there also sought replacements. Spring maintenance at petrochemical plants in Asia, along with virus-related restrictions in China, further reduced consumption in the East.

“The poor demand in Asia has provided European blenders with an opportunity to increase total gasoline molecules with a steady supply of naphtha and blending components to the region,” said Pamela Munger, a senior market analyst at Vortexa.

For now, Europe has also been able to compensate for the slump in Russian shipments with supplies from the US and the Mediterranean. However, the restart of petrochemical units in Asia and Europe could displace some of these supplies away from the gasoline blending pool.

And drivers in the US -- where gasoline prices are now at record highs -- are also likely to need more of the fuel from Europe, further tightening the market.

Strong demand in the US will help pull gasoline barrels from northwest Europe, diverting some naphtha to the blending pool, according to McDonnell of Energy Aspects. The proposed EU sanctions on Russian oil products could also cut naphtha supply in Europe, leading to greater competition for non-Russian supplies, he said.