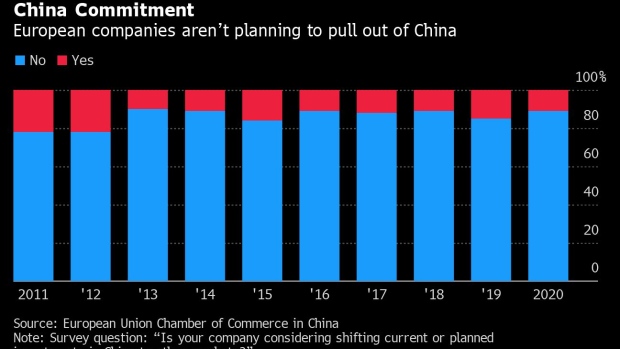 Workers at a factory in Guangxi. Photographer: Qilai Shen/Bloomberg , Bloomberg

(Bloomberg) -- European leaders talk of shortening supply chains and curbing China’s “Belt and Road” plan. But on the ground in Italy, Gimmi Baldinini says his designer footwear company is in no position to cut ties with the Chinese.

“Chinese workers have a better hand with gym shoes,” said the chairman of Baldinini, founded by his family in 1910 in northern Italy, where it still has the main production hub for the top segment of his goods. To produce sports shoes, the company relies on a Chinese plant in the Shenzhen area.

“Production costs over there are 75% lower than in Italy. I can’t consider cutting them off and reshoring that particular production line,” he said. “Simply, there’s no other way, unless the Italian government decides to cut tax and labor costs dramatically.”

Already buffeted by U.S.-China trade tensions, the European Union has stepped efforts to produce closer to home in the wake of the global pandemic, which is causing the steepest recession in almost a century. While drugs and medical gear have been an immediate priority, the initiative is wide ranging.

In an unusual foray into industrial policy, European Central Bank Executive Board Member Luis de Guindos and Dutch central bank Governor Klaas Knot have independently argued that companies should consider moving parts of their supply chains closer to home even if that meant higher costs.

While the U.S. may have voiced its concerns about China’s economic rise earlier and more loudly, Europe is seeking to thwart China’s expansionistpolicies, including using tariffs to try to curb the “Belt and Road” infrastructure plan.

As part of a proposed 750 billion-euro ($843 billion) coronavirus recovery package, the European Commission is talking about ensuring “strategic autonomy” in key sectors and building stronger value chains within the EU. It says a new pharmaceutical strategy will address risks -- such as Europe’s limited production capacity -- exposed during the crisis.

It won’t be an easy task. China manufactures approximately 40% of all active pharmaceutical ingredients used worldwide, according to Stada Arzneimittel AG, a German producer of generic and over-the-counter drugs whose manufacturing facilities are mostly located in Europe.

While China is an essential part of the supply chain, the company has increased inventories of components with longer shelf lives in recent months and is trying to source supplies from more than one manufacturer and from different countries, a Stada spokesman said.

The push isn’t just a proposal sitting in Brussels. National governments across the bloc are pushing to source supplies locally, competing for investments in production capacity in the process.

Germany plans to present a supply-chain strategy in the next few months as it aims to reduce the vulnerability of core industries to potential disruptions in trade flows. As part of the process, Europe’s largest economy is seeking to enforce tighter rules on human rights and environmental protection on incoming goods, a way to help protect local manufacturers.

Any rules should be designed in a way that doesn’t create an additional burden for companies, Economy Minister Peter Altmaier said in June after meeting industry representatives.

Supply-chain resilience is crucial for German industry because 17% of its production relies on global suppliers -- a much bigger share than in other countries. A recent study from Munich-based Ifo Institute showed Germany’s dependence on international suppliers could hold back the economy’s return to business as usual after the pandemic.

Evidence suggests a massive shift back to Europe is unlikely because of the ever-growing importance of China. The Asian superpower already accounts for about 40% of global vehicle deliveries and is the leading Volkswagen AG. In May, the German auto giant increased its exposure to the country by buying stakes in battery company Guoxuan High-Tech Co. and in its electric-vehicle partner.

“Manufacturers are moving toward more regional sourcing,” said Elmar Kades, a consultant at advisory firm AlixPartners. “But there won’t be 100% regional sourcing as companies will still need to ship certain raw materials, precious metals or electronics components that are used worldwide.”

To counter Asian dominance in electric-car batteries, France and Germany have pooled efforts to kick-start a European industry. The bloc plans to invest about 8.2 billion euros in coming years to build champions in battery-cell production, according to Laurent Michel, an official at France’s Ministry for the Ecological and Inclusive Transition.

Bringing manufacturing closer might not necessarily mean inside the EU. New plants could be located just outside the bloc.

While French President Emmanuel Macron has been trying to keep manufacturing at home, the country’s carmakers have reduced capacity in France and opened new export-oriented plants in Morocco. Peugeot manufacturer PSA Group opened its largest plant outside Europe and China there last year.

Keen to boost exports, Moroccan authorities have managed to draw close to 70 manufacturers of automotive components with the help of incentives, including free land plots, tax breaks and massive investment in infrastructure.

Bolstered by relatively low wages for an EU country, Portugal was already noting the efforts to shorten supply chains even before the virus outbreak.

“We were seeing some moves in this direction about two years ago, in both industrial and services sectors,” Luis Castro Henriques, chief executive officer of Portuguese trade and investment agency Aicep, said in an interview.

In Eastern Europe, countries like Poland and Romania are also pitching to attract investment, leveraging their EU membership, existing links to Western companies and labor costs that are a fraction of what employers in Germany pay.

“Many entrepreneurs and investors are wondering how to rebuild those damaged supply chains,” Polish Prime Minister Mateusz Morawiecki said on June 17 as he announced a plan to waive taxes for companies that plan to reinvest their profits in the country. “We are telling the whole world -- come to us.”

Romania has been working on a state guarantee program for large companies to boost so-called greenfield investments.

The disruption in international supply chains caused by the coronavirus crisis has forced companies to give greater weight to the proximity of vendors, ECB’s de Guindos said. The former Spanish economy minister’s comments were echoed by his colleague.

“We relied very heavily on international value chains in recent years and also actually pressed every buffer out of our system in our urge to efficiency,” Knot said on Dutch TV last month. Maybe it’s time to be less reliant on foreign countries and focus more on supply security, but “that would come at a cost,” he said.