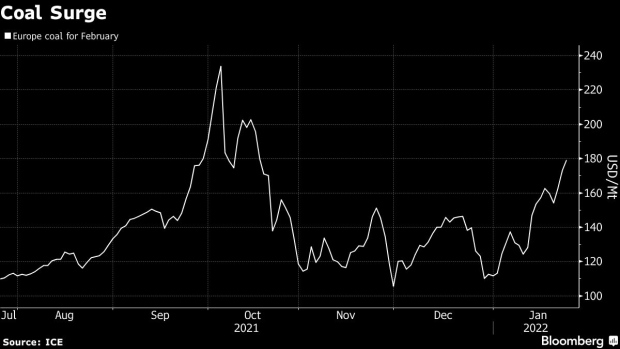 (Bloomberg) -- Coal will play a vital role in helping to keep the lights on in Europe this winter even as prices are jumping and lawmakers are doing their best to kill off one of the dirtiest power-plant fuels.

Northwest European coal for February rose more than 3% to trade at its highest in three months on Tuesday. The latest example of the fuel’s importance came on Monday as U.K.’s usage peaked at its highest level since March to help plug a gap in supplies early in the evening.

Governments from Germany to the Netherlands and the U.K. are all shuttering coal plants, which emits about twice as much carbon dioxide as plants burning gas. At the same time, grid operators are paying a fortune to some utilities to keep them available as a last resort when supplies from renewables plunge.

The U.K.’s National Grid Plc on Monday issued a warning that more capacity was needed and plants were called upon through the capacity market. Coal plants were producing as much 3,000 megawatts at about 5 p.m. London time. Gas plants also came on quickly to help fill the shortage.

Overall though, coal is still used for a tiny proportion of U.K. demand, which was just below 45 gigawatts at 5:30 p.m. on Monday, according to National Grid data.

The country is trying to shake its reliance on the sedimentary rock, with Drax Group Plc and Electricite de France SA set to stop using it completely later this year. That means an even greater need of natural gas, which is also soaring in price because of uncertainty over supplies from Russia and record low storage levels.

The closure of the U.K.’s remaining coal capacity coupled with the decommissioning of old nuclear plants “has the potential to further deepen the exposure” to gas prices, according to Glenn Rickson, an analyst at S&P Global Platts.

In Germany, Europe’s biggest power market, coal also showed its importance in November and December, with power output from hard-coal plants rising 16% from a year earlier, according to Fraunhofer data. That was partly driven by a rebound in demand.

Northwest European coal for February advanced 3.5% to $179/ton, after soaring 6.7% Monday on ICE Futures Europe.  That’s the highest since Oct. 18.