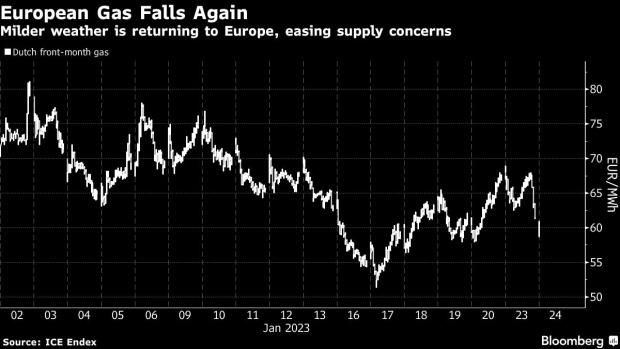 (Bloomberg) -- European natural gas dropped with fuller-than-normal stockpiles protecting against any supply curbs, while the demand outlook eased with an icy blast forecast to end soon.

Benchmark futures fell as much as 11%, extending Monday’s decline. The frigid weather has raised gas usage for heating, but high storage levels and strong deliveries of liquefied natural gas are calming nerves and helping to keep prices in check.

The market could ease further in the coming days with temperatures in northwest Europe turning milder and the warmer weather expected to last through to the first week of February, according to forecaster Maxar Technologies Inc.

Traders are also closely watching for the return of Freeport LNG, a major US exporting terminal shuttered by an explosion last summer. It’s completed repairs and is seeking a partial restart, although there’s no clarity yet on shipments as further approvals are needed. Some analysts expect it to resume exports by late February or early March.

Strong LNG flows and healthy inventories are providing confidence Europe will end this winter without energy shortages. That’s helping counter lower pipeline flows from Russia and maintenance-related curbs in supplies from Norway. Gas prices fell to a 16-month low earlier this month, easing some concerns over inflation and the economy in the region.

“Gas markets remained relatively stable in the face of the colder weather,” analysts at Alfa Energy said in a weekly note. “With weather meant to return to mild in early February, not much price volatility is expected till then.”

Norway, Europe’s top gas provider, on Tuesday was recovering from some of the recent cuts caused by planned and unplanned outages, but total shipments from the country are still below its maximum capacity.