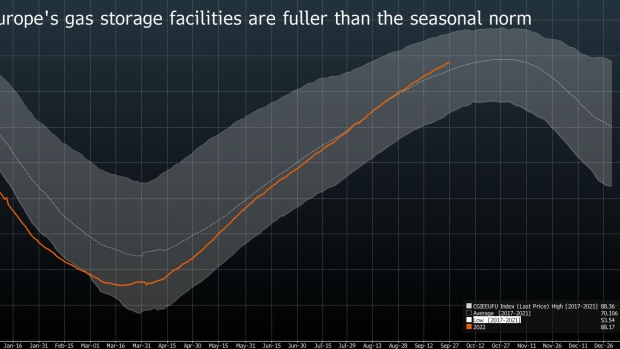 (Bloomberg) -- European natural gas prices fell after a two-day rally as traders assessed the risks to supply amid heightened tensions with Russia, even as steadily filling inventories eased some nerves.

Benchmark prices declined as much as 13% after rising 19% over the previous two days. The standoff between Europe and Moscow deepened this week after massive leaks erupted in the Nord Stream pipeline system, and some nations blamed them on sabotage. The Kremlin has said claims of Russian involvement are “absurd.” In response, Europe is bolstering security at key energy assets.

“While any international disruption of the EU energy infrastructure is alarming, we’re unlikely to see this have an immediate, material impact this winter,” said Martin Devenish, director of corporate intelligence at S-RM. “Aside from the politics, this sabotage is unlikely to have a significant effect on the crisis we’re facing on the ground.”

Healthy stockpile levels and European Union plans to tackle the crisis -- including measures to cap prices and boost liquidity for companies -- had helped ease prices from the highs of late August. Germany’s government announced a plan to limit gas prices for homes and business that will need €200 billion ($195 billion) of borrowing.

Still, risks remain for Europe, especially if there isn’t a significant reduction in demand and winter is colder than normal, Harry Huang, managing director for gas trading at Uniper Global Commodities, said at an industry conference in London.

The region “may struggle” if that happens, he said. “And there will be plenty of volatility in the market.”

Russia’s Gazprom PJSC warned Tuesday that flows through Ukraine were at risk because of a legal spat with the state-run energy firm over transit payments. If those shipments are halted, western Europe would be cut off, leaving just the TurkStream pipeline sending gas to Turkey and some countries in southern Europe.

For now, supplies via Ukraine remain stable, albeit at the reduced levels imposed after Russia’s invasion of its neighbor.

“While the investigation into the cause of the pipeline damage is ongoing, a near-guaranteed supply cutoff will inevitably affect Europe’s gas supply this winter,” said Emily McClain, an analyst at Rystad Energy AS. “But even more concerning is the impact on gas storage inventories ahead of next winter.”

Stockpiles have risen to about 88% of the continent’s capacity -- fuller than usual for this time of year. But an unusually cold winter could erode that quickly and make it a difficult period without the typical Russian supply. Replenishing the reserves next year also would be harder.