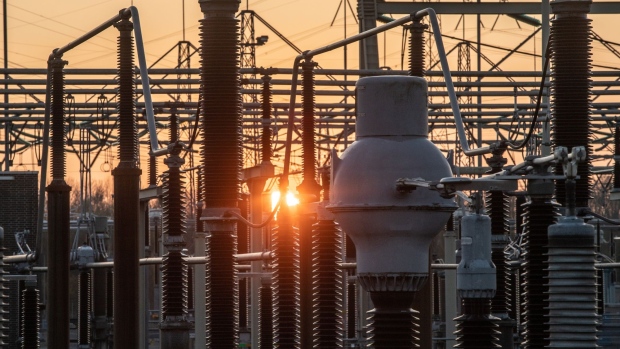 (Bloomberg) -- Natural gas prices in Europe increased as colder-than-average weather started to descend on the region while production faced headwinds.

Lower temperatures coincided with additional maintenance at facilities in Norway, as well as possibly higher competition for energy supplies with China. The Asian country on Wednesday moved away from its long-held Covid Zero approach, with traders betting that an economic recovery there might increase demand for liquefied natural gas.

Benchmark futures rose as much as 8.6% before settling 7.8% higher.

Europeans are starting to heat their homes and businesses as the northern part of the region faces freezing temperatures for the next two weeks, according to weather forecasts. Supply from Norway, a key provider amid reduced Russian pipeline-gas deliveries, has declined to the lowest since Friday amid extra works at production facilities.

Europe’s winter temperatures have taken a while to arrive, but now seem to be coming in at full strength. Gas storage sites are still relatively full for the time of year, but risks still linger that a severe cold spell could quickly deplete stocks, leaving the continent exposed to any new supply curtailments.

Traders are keeping a close eye on how long the cold weather will last in Europe and how far it will spread across Asia. With lower pipeline flows coming from Russia, Europe has depended heavily on LNG deliveries, which the region has successfully attracted amid weak demand from large Asian buyers.

Europe imported more than 11.4 million tonnes of LNG in November, an all-time high, according to Rystad Energy.

But such availability may soon change. China boosted energy purchases last month as temperatures there dropped, and heating demand for coal and gas also picked up. Now, the country’s government jettisoned key tenets of its virus elimination strategy that could allow for a swift economic recovery and raise energy needs further.

“China’s lower demand has helped Europe. But if we see a re-opening of the Chinese economy, we might see LNG cargoes diverting to there,” said Frank van Doorn, head of trading at Vattenfall. “China’s ability to revamp growth is an important question mark now.”

Day-ahead gas prices in the UK surged as much as 12%, driven by low temperatures and low wind power output in recent weeks, Rystad Energy said.