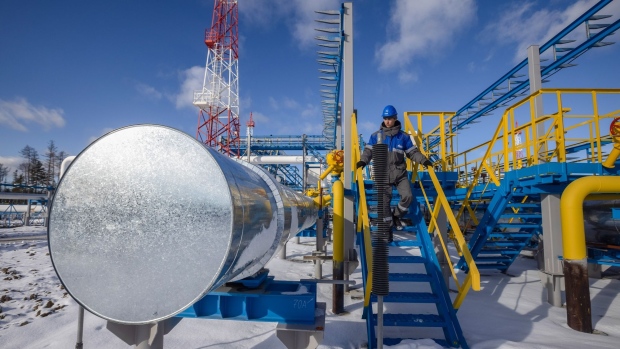 A worker inspects pipework at a gas pre-treatment unit at the Gazprom PJSC Chayandinskoye oil, gas and condensate field, a resource base for the Power of Siberia gas pipeline, in the Lensk district of the Sakha Republic, Russia, on Tuesday, Oct. 12, 2021. European natural gas futures declined after Russia signaled that it may offer additional volumes soon. Photographer: Andrey Rudakov/Bloomberg , Bloomberg

Russian President Vladimir Putin ordered Gazprom PJSC on Wednesday to focus on filling its European storage sites from Nov. 8, a day after it completes the process in Russia. This should help alleviate supply tightness, he said.

Benchmark Dutch gas for next-month delivery dropped as much 6.6% to 81.1 euros a megawatt-hour by 8:12 a.m. in Amsterdam, after closing lower on Wednesday. This isn’t the first time the Russian president sends prices down.

Russia’s focus on rebuilding domestic gas inventories, combined with low storage rates at Gazprom sites in the European Union, has become a major concern for the continent’s market, which is struggling with an energy squeeze and sky-high prices.

Europe started the heating season with the lowest inventories in more than a decade as Russia kept shipments capped, while competition with Asia for cargoes of liquefied natural gas remains intense.