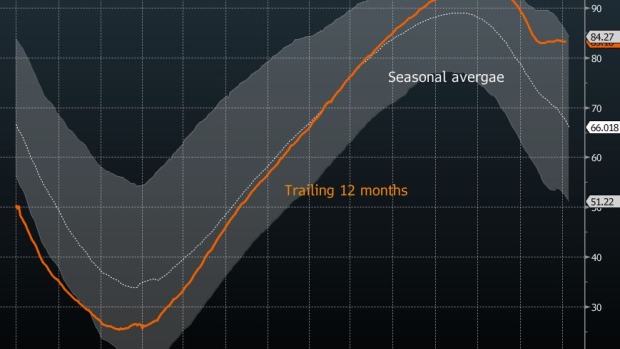 (Bloomberg) -- European natural gas rebounded as traders seek to balance the effects of a warm winter with the need to keep prices high enough to maintain LNG imports.

Benchmark futures gained as much 7.9% in a volatile trading session. Unseasonably mild weather has curbed heating demand, ensuring stockpiles remain fuller than normal. However, there is concern that the resulting price slump — a drop of about 50% over the past month — could cause liquefied natural gas cargoes to head elsewhere.

While Europe has so far made it through an unprecedented energy crisis that has fueled inflation, much of the winter remains. LNG imports have been critical in replacing some gas supplies amid reduced flows from Russia, but lower prices mean it is already more profitable for US sellers to send cargoes to Asia in February and March — especially if there is a cold snap there.

European and Asian prices tend to track each other as the two regions compete for the same pool of LNG. North Asia spot LNG prices inched higher amid an outlook from China for colder weather at the end of the month.

Cheap gas could also boost energy demand again in Europe, a situation politicians are seeking to avoid. For European industries, lower prices mean some factories can restart operations, Turri said. But a looming recession would “limit demand picking up,” he added.

“Market participants believe that the European gas balance is not comfortable enough to afford a significant boost in gas demand for power generation, particularly as the price decline could also trigger a restart of some industrial demand,” EnergyScan, the analysis platform of Engie SA, said in a daily note.

Meanwhile, the UK is getting less LNG due to bad weather delaying unloadings at Milford Haven, home to two import terminals. Send-outs from these facilities to the grid are now at the lowest level since October.

Still, supply on the whole is plentiful for now. Norwegian gas flows to Europe rose to the highest level since April as nations such as Germany rely on the Nordic nation to fill in the gaps left by Russia’s absence. Above-average temperatures are forecast through at least the middle of February.

Germany Gains Confidence That Worst of Energy Crisis is Over

Prices swung earlier after a ship grounded in the Suez Canal was refloated. It only briefly disrupted traffic in the waterway that’s vital for the LNG trade from Qatar to Europe, with just minor delays now expected.