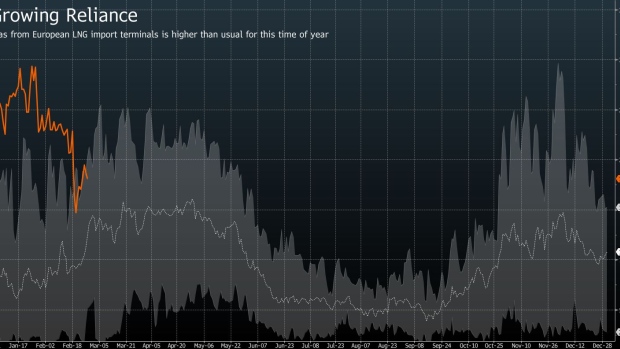 Pipes carrying gas at the Kasimovskoye underground gas storage facility, operated by Gazprom PJSC, in Kasimov, Russia, on Wednesday, Nov. 17, 2021. Russia signaled it has little appetite for increasing the natural gas it transits through other territories to Europe as the winter heating season gets underway. , Bloomberg

(Bloomberg) -- European natural gas surged as much as 60% as supply fears were compounded by traders trying to avoid exposure to a key Russian player in the market.

Benchmark futures rose to a record high, before easing slightly. Gas and power traders are backing away new deals with Gazprom PJSC’s trading unit, according to people familiar with the matter. There’s a further risk that companies start unwinding previously agreed contracts or clearing houses decide to stop doing business with the Russian company’s unit, liquidating their positions.

The war has sent commodity prices soaring -- with Brent crude topping $113 a barrel on Wednesday -- as buyers, traders and shippers remain wary of dealing with Russian supplies. Disruptions in gas supplies could also come from damage to infrastructure in Ukraine, but the risk of sanctions applying to energy “remains a real possibility,” said Kaushal Ramesh, a senior analyst at Rystad Energy.

But for now Russian supplies continue, and have even increased since the invasion of Ukraine last week. Shipments arriving at the key European entry point of Velke Kapusany in Slovakia have rebounded to normal levels and gas flowed to Germany via the Yamal-Europe pipeline overnight, with more capacity booked for later on Wednesday.

Europe relies on Russia for about a third of its gas, and any disruption could keep prices high for longer, making it difficult to refill storage facilities over the summer, and prolonging the energy crunch. Governments in the region are looking to boost liquefied natural gas imports, which puts them in competition with Asian buyers also starting replenishing their stocks from March onwards.