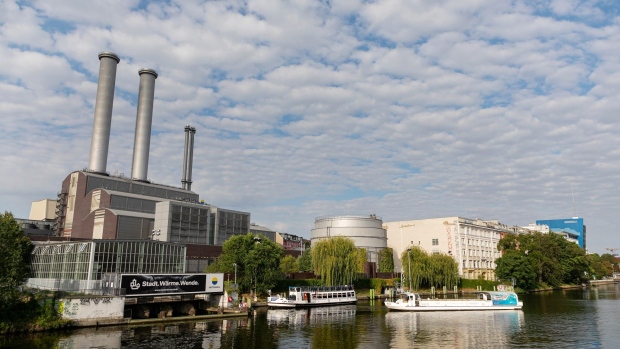 Tour boats on the Spree river next to the Mitte Combined Heat and Power (CHP) natural gas power plant, operated by Vattenfall AB, in central Berlin, Germany, on Tuesday, Aug. 9. 2022. German Finance Minister Christian Lindner said he will look at ways of exempting the country's looming gas levy from sales tax in an effort to at least partially ease the burden on consumers from soaring energy costs. Photographer: Krisztian Bocsi/Bloomberg , Bloomberg

(Bloomberg) -- European natural gas prices headed for a fourth week of gains, and electricity rose to a record as the region braces for an even deeper supply crunch over the winter that could push major economies into recession.

Benchmark gas futures fell on Friday, but are still about 6% higher this week. Russian shipments via the key Nord Stream pipeline edged lower to around 18% of capacity for about an hour Friday afternoon, briefly driving prices higher. Flows returned to 20% soon after but the market’s reaction reflects the deep set concerns over supply.

The energy crisis crippling Europe could get worse with only about two months to go before the winter heating period officially begins. The region is still heavily dependent on Russian gas to get through the colder months, and any further disruptions to supply may heighten the risk of blackouts and rationing.

“Prices will continue at high levels so long as gas supply from Russia appears to remain tight in the foreseeable future,” Rystad Energy AS analyst Lu Ming Pang said in a note.

Still, prices have been kept in check in recent days by Europe’s storage levels recovering to near-normal for the time of year. The region has boosted imports of liquefied natural gas as it stockpiles in preparation for the winter. The purchases, however, are coming at a cost as the liquid fuel becomes more expensive with the continent vying for supplies with Asia.

Dutch front-month futures, the European benchmark, declined 1.1% to 205.88 euros a megawatt-hour as of 4:07 p.m. in Amsterdam. The UK equivalent contract slipped 1.9%.

German benchmark electricity futures rose as much as 1.8% to a record 463 euros a megawatt-hour. Low French nuclear availability and higher premium for coal-fired power are leaving power markets more exposed to gas at a time of tight supplies, Inspired Energy said in a note.

“Despite the difficult situation in terms of gas flows via Nord Stream 1, it’s a fact that we’re still filling up storage and that’s a positive message,” German Chancellor Olaf Scholz said on Friday. “It’s important that we prepare ourselves for a serious situation.”

Gas consumption may also rise due to constraints on other fuels, with traders bracing for a possible halt to river traffic at a key waypoint on the Rhine, a crucial waterway for the transport of commodities such as diesel and coal. Water levels are critically low amid a severe heat wave, threatening to upend trade flows for months.