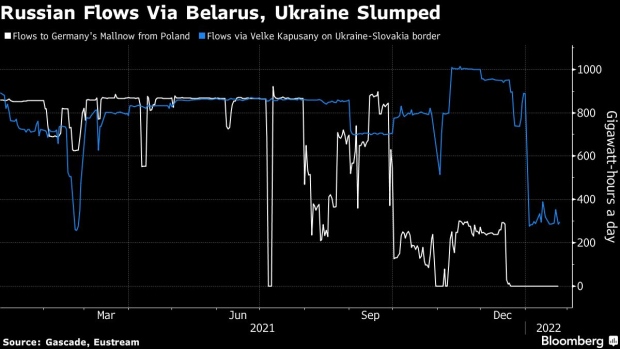 (Bloomberg) -- European natural gas surged by the most in about three weeks as the risk of conflict over Ukraine increased, threatening supplies in the region.

Benchmark futures jumped as much as 20%, the most since Jan. 4. Russian gas flows to Europe could be curtailed for “an indefinite period” if the nation’s Nord Stream 2 pipeline project to Germany is hit by sanctions as a result of escalating tensions over Ukraine, according to Goldman Sachs Group Inc. Prices may also reach record levels, the bank said.

The U.S. has ordered families of diplomats out of Ukraine due to the “threat of Russian military action.” The U.K. followed by withdrawing some of its staff and dependents from its Kyiv embassy. Tension is rising with the New York Times reporting President Joe Biden is considering deploying troops to eastern Europe and the Baltics.

A conflict could potentially reduce gas flows into Europe at a time Russia has been curbing shipments for months. The U.S. so far has rejected pressure to escalate sanctions and is reassuring Europe that there won’t be any disruption to short-term energy supplies. However, that could be a hard promise to keep as gas inventories in the continent run dangerously low and demand stays high mid-winter.

European Union foreign ministers are set to discuss the situation with U.S. Secretary of State Antony Blinken on Monday. The talks come as President Vladimir Putin has denied he currently plans to attack Ukraine, a claim Ukraine doesn’t believe, the country’s ambassador to the U.K., Vadym Prystaiko, said. Kremlin spokesman Dmitry Peskov said Monday that fears over gas cuts to Europe was “hysteria.”

Also See: What Would War in Ukraine Mean for Europe’s Energy Crisis?

Still, some analysts see significant risks, with Goldman warning that uncertainty around European gas supplies is likely to continue over the summer and even through 2025.

“Should tensions between Russia and the Ukraine escalate, the initial uncertainty around its impact on gas flows would likely lead the market to once again add a significant risk premium to European gas prices,” the bank said in a note.

To ease supply concerns, the EU is discussing the possibility of increasing imports, with meetings planned to consider shipments from Azerbaijan and the U.S.

“In the short term, we are faced with unusually high energy commodity prices, a trend intensified by geopolitical tensions,” Energy Commissioner Kadri Simson said on Saturday.

Further bullish price signals are coming from the liquefied natural gas market. Chinese companies only sold a fraction of LNG cargoes offered for this year, easing hopes for European consumers that volumes would flood the market and help lower prices. At the same time, Japanese buyers are returning to the spot market seeking shipments.