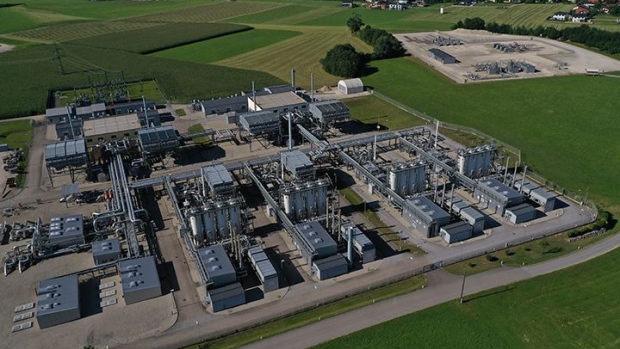 HAIDACH, AUSTRIA - AUGUST 04: In this aerial view the Haidach underground natural gas storage facility stands on August 04, 2022 near Haidach, Austria. The German and Austrian governments have agreed to share the site in an effort to strengthen their common energy needs in light of diminishing gas flows from Russia. The Haidach facility, which is among the biggest gas storage sites in Europe, previously supplied southern Germany and western Austria with gas and was not even connected to the gas network for supplying the rest of Austria. The Austrian government has also enacted legislation to seize unused storage capacity at the site from Russian energy company Gazprom, which is a major shareholder of the Haidach site but has curtailed its gas flows there. Both Germany and Austria are still heavily dependent on Russian gas imports but are feverishly seeking alternatives. The Russian government is using energy exports as a means to put pressure on European countries that are supporting Ukraine. (Photo by Alexandra Beier/Getty Images) , Photographer: Alexandra Beier/Getty Images Europe

European energy prices are surging as a scorching summer boosts demand while natural gas supplies from Russia remain limited. The focus is also shifting to how the region will withstand winter demand shocks.

Coal prices soared to a record as utilities increasingly burn the fuel to fill in gaps left by reduced supply of gas from Moscow. Benchmark gas futures were little changed after wild gyrations, settling near record high for a second day in a row.

Europe is engulfed in an energy crisis fanned by Russia’s war in Ukraine, a climate emergency on one of its key rivers and recovery from the global pandemic. Businesses and households are facing the worst inflation in decades and the risk of recession, while governments are stepping back from their clean-energy goals just to ensure that there is enough fuel to make it through the coming winter.

Surging energy prices mean “we are going to see some steep contraction in the European economies,” Amrita Sen, director of research and co-founder of London consultancy Energy Aspects Ltd., told Bloomberg Television on Wednesday. Even though many industries are rationing gas and switching to alternatives where possible, the burden of high prices is “huge,” she said.

The Rhine River has dropped to historically low levels amid hot and dry weather, hindering the transport of energy commodities including coal. There may be some relief, however, as the water at a key chokepoint is set to rise above a critical level in the coming days.

Vessel Is Blocking Rhine River in Germany Near Kaub Chokepoint

German utility Uniper SE, which reported a net loss of 12 billion euros ($12.2 billion) on Wednesday, has previously warned that it may not have enough coal to run its power plants in full if the Rhine water crisis worsens.

The concerns are being partially countered by storage sites across the region continuing to be replenished in line with the five-year average. European inventories are 75% full, and Germany has reached an intermediate refill target two weeks ahead of schedule. But the country’s energy regulator warned that stockpiles would last only two and a half months if Russia cuts off supply completely.

“Higher prices should be the biggest energy saving mechanism possible, accompanied by support for those who cannot afford these prices,” Klaus Mueller, president of the Federal Network Agency, said in an interview on Tuesday.

High liquefied natural gas imports into Europe are helping fill storage, but even that is now becoming more expensive as Asian importers are buying more aggressively to meet their own demand and to stockpile for the winter.

Front-month futures at the Dutch hub, the European benchmark, settled steady at 225.835 euros a megawatt-hour, after gaining as much as 5.1% earlier. The equivalent contract in the UK dipped 0.5%.

German year-ahead benchmark power gained for a seventh day, climbing to a record-high closing price of 511.60 euros a megawatt-hour. Prices are about six times higher than this time last year.

Germany, Europe’s largest economy, has taken one of the biggest hits from the energy crisis due to its traditionally heavy dependence on Russian supplies. The government has urged lower consumption, warned of rationing and this week slapped a levy on gas use. It’s also rushing to set up floating terminals to import LNG.

The casualties are piling up. Uniper, which was rescued with a government bailout last month, expects a loss for the full year as the company struggles to fill supply gaps left by Russia. Trafigura Group’s Nyrstar announced this week that it would halt production in one of Europe’s biggest zinc smelters following the energy crisis. Others producing everything from fertilizers to aluminum have also been hit.