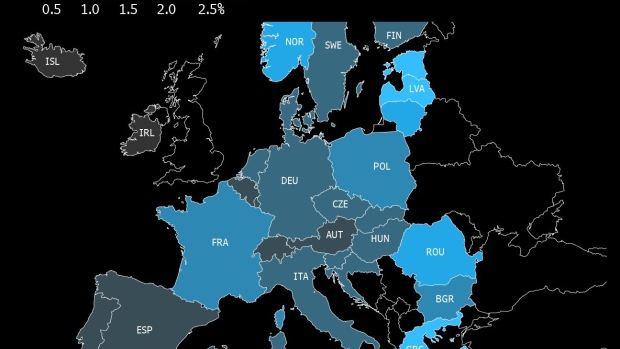 A civilian practices how to handle a firearm at a military training exercise conducted by the Prosvita society inside a bomb shelter during an air raid alarm in Ivano-Frankivsk, Ukraine, on Friday, March 11, 2022. Ukraines Foreign Minister Dmytro Kuleba said he doesn't see the progress in Russian-Ukrainian talks cited by President Vladimir Putin and reiterated that the country could compromise on neutral status if offered security guarantees. , Photographer: Bloomberg/Bloomberg

(Bloomberg) -- Europe saw some of the biggest growth in arms imports among world regions before Russia went to war with Ukraine, and the continent is expected to bolster defense capabilities in the coming decade, according to a report.

The largest arms buyers in Europe were the U.K., Norway and Netherlands, the report said. Imports for the region were set to accelerate with other European countries recently placing large orders for new weaponry, particularly combat aircraft from the U.S, according to the study.

“The severe deterioration in relations between most European states and Russia was an important driver of growth in European arms imports, especially for states that cannot meet all their requirements through their national arms industries,” said Pieter Wezeman, senior researcher with the SIPRI arms transfers program.

Europe has strengthened its defense posture amid the growing prospect of conflict with Russia after President Vladimir Putin ordered forces into Ukraine on Feb. 24. The attack prompted Germany to plan a massive boost in defense in an historic policy shift, while Denmark and Sweden now have ambitions to meet the defense spending target that the North Atlantic Treaty Organization has set for its members.

Ukraine, which has its own weapons manufacturing sector, was also buying arms from overseas during the five years to 2021. The Czech Republic was the main supplier of arms to Ukraine, accounting for 41% of imports followed by the U.S. at 31%.

The U.S.’s share of the international arms exports rose to 39% over the last five years while Russia and China have decreased to 19% and 4.6%, respectively. Among importing regions, Asia and Oceania remain the largest buyers for major arms, receiving 43% of global transfers since 2017.

“Tensions between China and many states in Asia and Oceania are the main driver of arms imports in the region,” said Siemon Wezeman, another researcher with SIPRI. “These tensions are also a major factor in U.S. arms transfers to the region.”

India was the world’s largest importer of weapons in 2017-2021. Five other countries, including Australia, China, South Korea, Pakistan and Japan, were among the top ten buyers of arms.

Here are some other findings in the report: