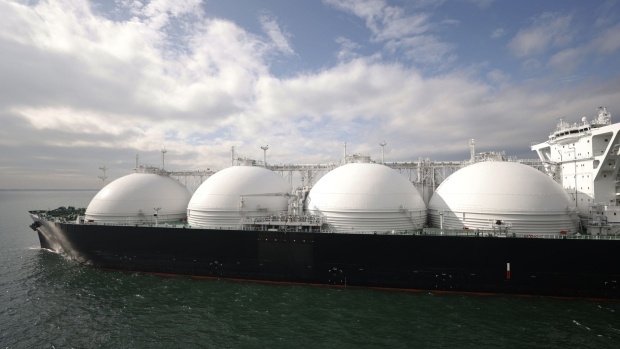 (Bloomberg) -- Asia’s relentless buying of liquefied natural gas earlier this year has left the region so well stocked for winter that spot shipments are being diverted to energy-hungry Europe.

Multiple vessels are now being diverted from Asia after prices in Europe traded at a rare premium, traders with knowledge of the matter said. A looming LNG wave will bring much needed supplies just as temperatures are dropping fast and is helping push European gas prices down from record-highs last week.

Energy prices soared in Asia earlier this year as China stockpiled everything from coal to fertilizers ahead of the winter. Now that a mild start to winter has ensued in Northeast Asia, buyers from Japanese utilities to Chinese factories are sated, while spot inquiries for cargoes have dropped to a whimper last week, said traders.

In Europe however, buyers are struggling to replenish inventories amid uncertainty over the startup of the Nord Stream 2 pipeline from Russia. From Italy to Poland, the continent has started to bid up the market to secure cargoes, although at prices surpassing those seen at the peak of last winter.

“Europe is simply bidding gas away from Asia to not run out of electricity,” Goldman Sachs analyst Damien Courvalin said in a call with reporters Friday. Temperatures are plunging while it’s been a relatively mild winter so far in Asia, he said.

Sellers have begun diverting cargoes away from Asia to take advantage of the spread, which may only accelerate over the next weeks.

Traders are watching for any signs on whether economics would shift to make it profitable to send supplies to Europe directly from production facilities in the Pacific region. Typically, Europe is supplied from the Atlantic basin producers such as the U.S., northern Russia or Nigeria, or the Middle East.

Supplies not limited by destination restrictions can head where the best market is.

Prices in Europe are so high that some Asian countries may even choose to re-export LNG they imported for their own consumption. But this rare move is unlikely at the moment because LNG cargoes from the U.S. and Western Africa are much preferred due to the time traveled, Mathew Ang, an analyst at Kpler, said.

The Minerva Chios vessel was sailing from the U.S. to Asia when it U-turned around December 15 and is heading toward the Red Sea, according to Bloomberg shipping data. The Lngships Manhattan, which was originally heading to China, is on its way to North Europe from the U.S., Kpler’s Ang said.

More shipments could follow suit although they aren’t likely to be cheap.

To be sure, chillier weather could raise demand in January and see a return of Asian buyers to the market, traders said. A cold snap in China’s east and central regions over the past weekend was expected to drop temperatures by 6 to 10 degrees Celsius, according to the country’s meteorological administration.

For now, extra supplies for Europe would be welcome as storage levels are less than two-thirds full before the worst of the winter has started. The European gas benchmark in the Netherlands fell 4.1% on Friday but is up about 600% this year.