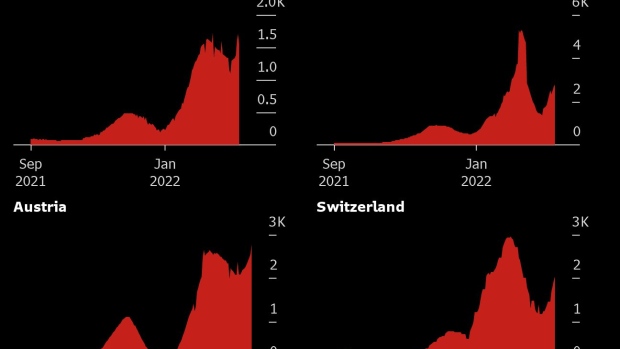 (Bloomberg) -- Europe tried to leave Covid-19 behind, but the rush to unwind restrictions is now setting the stage for a revival of pandemic risks.

Accelerated by the emergence of BA.2 -- a more-transmissible strain of the omicron variant -- the virus has spread rapidly. Germany has set fresh records for infection rates for four straight days. Austria has also reached new highs, while cases in the Netherlands have doubled since lifting curbs on Feb. 25.

Most authorities have shrugged off the surge, showing little appetite to re-impose curbs after easing measures just a few weeks ago. But the virus threatens to cause problems anyway, with businesses and schools disrupted as people call in sick.

“The messaging from politicians is encouraging many people who were taking precautions to mix with others,” said Martin McKee, professor of public health at the London School of Hygiene and Tropical Medicine. “It does seem very courageous to assume that the pandemic is over.”

The timing could hardly be worse. Europe can ill afford further strain as the region grapples with a cost-of-living crisis, which the war in Ukraine threatens to intensify as the conflict sends food and gas prices soaring.

German Health Minister Karl Lauterbach is one of the few officials to raise the alarm. The outbreak shows signs of worsening and causing “many deaths,” he said on Twitter. The Harvard-trained epidemiologist has also renewed his plea for a vaccine mandate.

His cabinet colleagues, however, are showing less urgency, as the number of Covid cases in intensive-care units are at less than half of peak levels.

“A key reference point for the fight against the pandemic is the situation in the health system,” Finance Minister Christian Lindner said Monday at a press briefing in Berlin. “Our health system is certainly busy, but fortunately we don’t need to worry about a structural overload at the moment.”

In a sign of the softer approach, Austria last week suspended a law that made coronavirus vaccinations mandatory, stepping back from one of Europe’s strictest measures despite record infections.

In France, millions of high school students and teachers ditched masks for the first time in almost two years on Monday, while Germany is set to let its remaining curbs expire on Sunday. England will drop its last restrictions on Thursday and end free mass testing on April 1.

But on the ground, the pandemic is becoming increasingly evident again.

In Italy, which has gone slower than most other European countries in unwinding restrictions, about 120,000 school kids, some 2.5% of the total, were in quarantine during the week that ended March 5 -- the latest data available from the Education Ministry. In the southern town of Cerchiara di Calabria, the mayor even closed all schools this week due to rising infections.

The renewed outbreak is prompting an ad-hoc revival of measures to contain the spread. At Octave et Arpege, a music and theater school in Paris, the director asked families on Monday to have children wear masks and follow other hygiene rules. At a Cirque Zingaro performance on Sunday, about half of the audience opted to keep masks on even though they’re no longer mandatory.

In Germany, the record infections means there’s “the danger of long Covid for more people than ever before,” Lauterbach said on Twitter on Monday. “Two hundred deaths per day. Soon it could be more.”