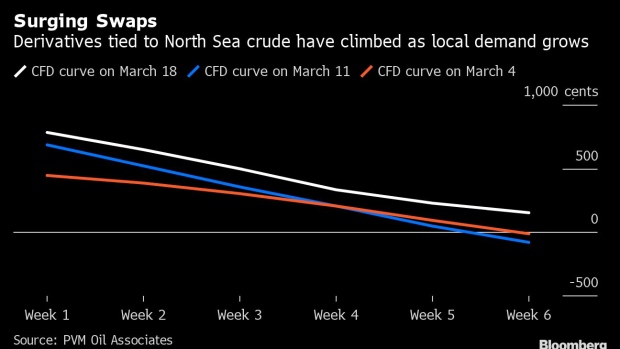 European refiners are increasingly turning to their own backyard for oil supply in the wake of Russia’s invasion of Ukraine.

More than half of crude lifted from Norway’s Mongstad terminal so far this month, mostly a grade called Johan Sverdrup, has been shipped to three normally regular buyers of Russian oil: Poland, Lithuania and Finland. The proportion is the highest since the grade started production in 2019.

Johan Sverdrup, along with another North Sea grade called Forties, are popular among Chinese and South Korean refiners. However, their sulfur and density qualities also happen to be relatively close to those of Russia’s flagship grade Urals. That has made them coveted by European refiners who are trying avoid buying from Moscow.

Russia’s invasion also drove the oil market into a so-called super-backwardation where traders are willing to pay very large premiums to secure immediate supply rather than having to wait.

The structure means that locking in a sale at a later date would mean locking in a cheaper price. With deliveries to Asia taking upwards of 60 days, such trades have become increasingly uncommon.

Derivatives that traders use to hedge physical cargoes underscore the increased local demand. The forward curve in contracts for difference in Brent oil is also increasingly backwardated, according to data from PVM Oil Associates.

So far only one supertanker hauling 2 million barrel of Forties crude has been shipped to Asia this month, compared with an average of about 14 million barrels of North Sea grades per month last year, according to data compiled by Bloomberg.

Most European refiners have scaled back crude purchases from Moscow for fear of reputational damage, or an eventual sanctions backlash.

Forties and Johan Sverdrup, two of the highest-production crudes in the North Sea, are regarded as suitable replacements for Urals.

PKN Orlen’s refinery in Lithuania, which had never bought Johan Sverdrup before, took three cargoes this month. Flows of North Sea grades to Finland also rose to the highest in more than two years.

Despite strong buying interest, there are not many offers to sell around, according to traders.

Oil majors, especially those who have upstream assets in the North Sea, are moving most of their barrels back to their own system rather than making them available for other buyers as they might in normal times, the traders said.