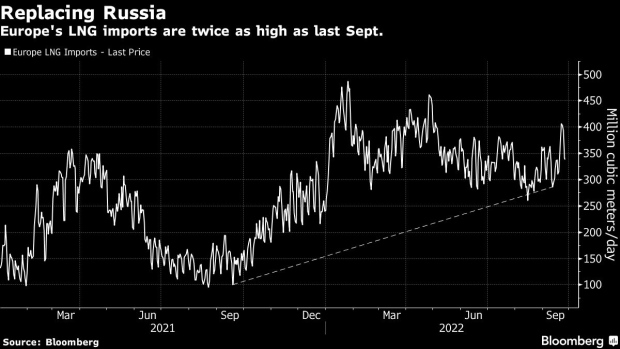 (Bloomberg) -- Europe’s frenzied buying of liquefied natural gas means it’s likely to have enough of the power-generation fuel this winter to offset supplies from Russia, according to BloombergNEF.

The region may import almost 40% more LNG during the coming winter than in the prior year, while it may increase purchases next summer by about 14% to rebuild lost inventories, BNEF said in a report published Tuesday. Along with demand destruction from higher energy prices, those shipments are enough to cover a complete halt in Russian pipeline flows from Oct. 1, it said.

To source the extra fuel, European buyers will need to purchase 90% more LNG on the spot market than they have secured under long-term contracts, further ratcheting up competition with Asia. That will support global gas prices that have soared since Europe sought to reduce its reliance on Russia after its biggest supplier invaded Ukraine in late February.

“Elevated spot LNG prices are set to persist as Europe needs to maintain its pull on all available LNG supply, leaving very little for Asia,” BNEF said. China and emerging Asian markets are likely to see lower imports, it added.

Under BNEF’s central scenario, which assumes weather conditions in line with the average over the past 10 years and no Russian gas flows, Europe is seen importing 40 million tons of LNG this winter and fractionally more in the summer to replenish inventories. That would leave 12 million tons of spot volume for Asia over the period, which is seen needing only 8 million tons more than its contracted supply.

However, a cold winter in North Asia would divert 5.6 million tons away from Europe, primarily to fuel Japan’s demand, and an ensuing hot summer would see that number rise to 6.9 million over the next 12 months, according to the report. That scenario will likely see increased price competition.

Meanwhile, more Russian LNG will go to China, where winter demand is expected to drop 16% from a year earlier. Japan’s consumption is forecast to fall 8% in the fourth quarter from the same period in 2021 as the nation turns on coal-fired plants, while South Korea’s demand could rise 10% year-on-year because of stockpiling, the report showed.

Supply is likely to increase only marginally this winter, bringing little relief to the tight market, BNEF said. Risks to production include delays to the restart of the Freeport LNG project in the US and supply issues in Egypt and Nigeria.