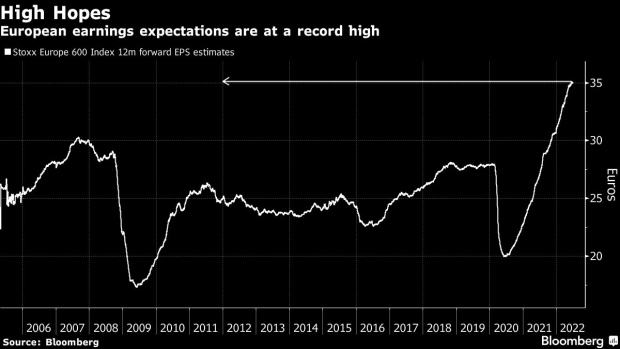 (Bloomberg) -- Europe is now the only region where analysts are still increasing their estimates for corporate profits, with banks leading the pace of upgrades, according to Sanford C. Bernstein strategists.

Brokerages predict record profits in the region this year, according to data compiled by Bloomberg, even as concern mounts that a recession is looming because of hawkish central banks, soaring prices and the war in Ukraine.

“Strong reported earnings growth and breadth of beats for European companies in recent quarters may be deterring analysts from cutting estimates now,” strategists Sarah McCarthy and Mark Diver wrote in a note. “They have been consistently behind the curve in forecasting the recovery in earnings as economies reopened following the pandemic.”

The upcoming earnings season will be paramount for European stocks, which have failed to stage any meaningful recovery this year amid the economic worries. The Stoxx Europe 600 Index has slumped 17% from its January record.

“Banks are now showing the strongest pace of earnings upgrades, ahead of energy,” the strategists wrote. “This makes sense in the light of the rising interest rate outlook, which should be beneficial for banks earnings. This is not reflected in the recent performance of banks.” The Stoxx 600 Banks Index has fallen 11% this year.

The only time there was ever a major “earnings recession” in Europe was after the global financial crisis, the Bernstein strategists said. Average 12-month and 24-month forward change in consensus earnings growth remained positive following other periods of peak growth, they said.

Some brokerages predict that the earnings optimism will evaporate once analysts fully take into account the probability of a recession. Strategists at Goldman Sachs Group Inc. last week cut their price targets and profit growth forecasts for European stocks.