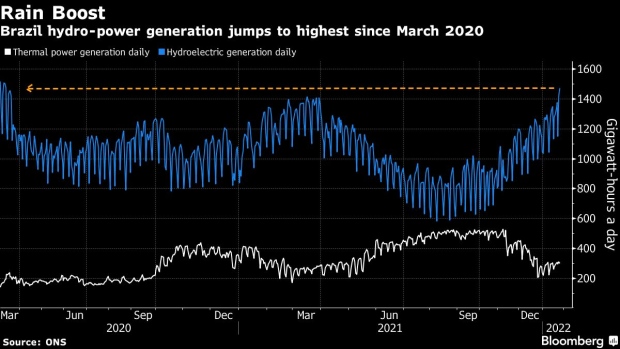 (Bloomberg) -- Europe, which has been luring liquefied natural gas cargoes away from Asia, will now have less competition from Brazil as rains are refilling the South American country’s hydroelectric dams.

Brazil’s hydro power generation is up nearly 25% from a year ago after a historic drought last year depleted reservoirs and led the nation to import a record 135 LNG cargoes, pulling supplies that would have traditionally gone to Europe or Asia.

Europe’s unprecedented energy crisis has turned the continent into a magnet for spot LNG cargoes seeking higher prices. The risk Russia will escalate tensions with Ukraine, triggering fears of supply disruptions, make the relief from Brazil all the more important.

“Declining demand from other import markets could be routed to Europe even if Russia doesn’t invade Ukraine,” said Charlie Riedl, executive director for the Washington-based Center for Liquefied Natural Gas. “But if Russia does decide to invade Ukraine, it becomes even more likely that those cargoes would route to Europe.”

In addition to increased rainfall, Brazil’s economy is also slowing down, reducing demand for electricity from gas-fired power plants. So far this year, the country has received six LNG tankers, compared with eight over the same period a year ago. And as dams get fuller, the need for cargoes will likely decrease more.

Last year, Brazil was buying LNG spot cargoes at a premium to European gas prices, traders said. The benchmark price in Europe reached a peak of more than $67 per Million thermal units in December.

On Tuesday, Brazil’s grid operator, known as ONS, said it was in touch with a power plant that uses LNG in the Northeast of the country to reduce its output by 30% given the rise in hydro dam levels.

“The economic deceleration, mild spring temperatures and inflows close to long-term averages reduced the load increase in the fourth quarter,” said Gabriel Dufflis, the lead analyst at Wood Mackenzie’s Brazil power sector research team. “If rainfall persists near average through April, early May, then reservoir levels will end the dry season above 50%.”