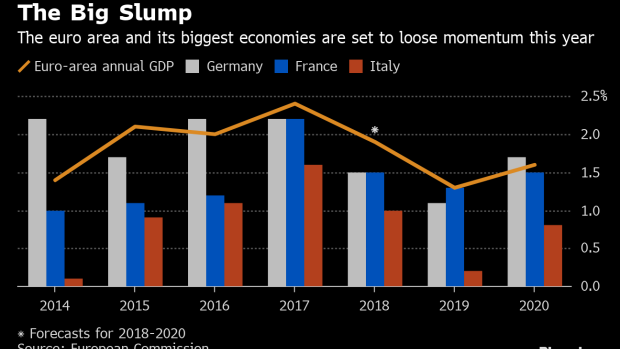 (Bloomberg) -- For all the palpitations that the trade war between the U.S. and China will knock out their economies, it is Europe that increasingly looks like the biggest threat to global growth.

Deteriorating demand is evident across the 19-nation euro area as it finds itself squeezed between international and domestic drags. That leaves its expansion at risk of barely topping 1 percent this year, a sharp slowdown from 2018, with even continental powerhouse Germany in trouble.

Investors are tuning in. The Bloomberg euro index is near its lowest since mid-2017 and European stocks have never been cheaper relative to bonds in terms of yield gap.

“The concern I have right now is in Europe,” said Salman Ahmed, chief investment strategist at Lombard Odier. “It’s clear China is going through a slowdown, but there’s also a strong amount of stimulus in the pipeline. However, in Europe, things are deteriorating quite fast.”

The extent and surprising suddenness of the weakness reflects that the slowdown is hitting the core of the region. While the likes of Greece were at the root of past sluggishness, this time Germany’s prospects are crumbling after a protracted slump in manufacturing. Household spending has also ground to a halt in France, which is beset by the Yellow Vest protests.

Together those two countries account for about half the euro-area economy.

“If France stops consuming and Germany stops producing you have a major problem in the euro zone,” said Ludovic Subran, deputy chief economist at Allianz.

The problems don’t stop there. Italian bond yields have started to creep higher again amid doubts over fiscal management, the health of banks is questionable and Brexit remains unresolved. European elections in May could see gains for anti-EU parties, something that’s already worrying some companies.

“Ultimately we are optimistic about the U.S., but believe that the downside risks have risen sharply in Europe,” said Deutsche Bank chief economist David Folkerts-Landau.

In the meantime, softer growth in China is pinching, with automakers such as Fiat citing weaker demand in the world’s second-largest economy. That’s filtering through to other companies, with Brussels-based Umicore saying last week that profit will be held back by the global automotive slowdown.

Even companies reporting resilience in China are wary. L’Oreal chief Jean-Paul Agon said this month the economic backdrop will remain “volatile and unpredictable,” though the French cosmetics giant also posted forecast-beating sales helped by the “dynamism of Chinese consumers.”

If it does get worse, there’s a question over how authorities could respond, and the European Central Bank has little left in the tank.

Dramatic action may still not be needed. Germany’s downside may be limited by record-low unemployment along with modest fiscal stimulus. And Bloomberg Economics research suggests that spillovers from Germany to other euro nations is usually containable. That’s partly because it has a different structure and its shocks are country-specific.

Goldman Sachs has downgraded its near-term euro-area expectations, though it sees an improvement later this year, citing a boost from lower oil prices and fiscal policy.

“The domestic economy is quite resilient,” said Aline Schuiling, economist at ABN Amro. “You could very well have a negative first quarter and a weakish second, but after that it should pick up again. I don’t expect a deep or prolonged recession.”

--With assistance from Anna Edwards, Blaise Robinson and Matthew Miller.

To contact the reporters on this story: William Horobin in Paris at whorobin@bloomberg.net;Catherine Bosley in Zurich at cbosley1@bloomberg.net