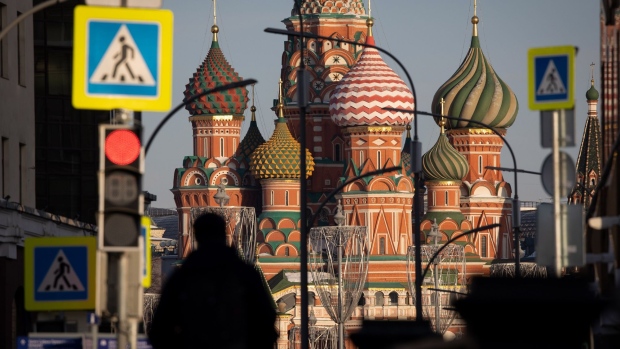 The domes of Saint Basil's Cathedral in Moscow, Russia, on Tuesday, Feb. 15, 2022. Russia announced the start of a pullback of some forces after drills that raised U.S. and European alarm about a possible military assault on Ukraine. , Bloomberg

(Bloomberg) -- The European Union will propose new laws that would give member states more power to seize criminal assets, potentially including those of sanctioned Russian individuals and entities.

The EU proposal, aimed at strengthening the bloc’s tools against organized crime, would expand the ability of member states to trace, freeze and investigate certain assets and will set out the conditions under which those assets could be confiscated if criminal activity is involved, according to people familiar with the matter and documents seen by Bloomberg.

The plan would task EU nations with setting up asset recovery strategies and offices, and a centralized registry containing information on frozen, managed and confiscated assets, said the people, who asked not to be identified because the matter is private. The asset recovery offices would be able to temporarily freeze a property as an investigation is carried out.

The move comes as the EU struggles to find new ways to mitigate Russia’s ability to finance its war in Ukraine and as the bloc designs a recovery package to fund the nation’s reconstruction. Last week, the EU proposed granting Ukraine as much as 9 billion euros ($9.7 billion) in loans and grants to fund rebuilding in the short term.

At a summit in Brussels next week, EU leaders will support exploring the use of frozen Russian assets to help finance Ukraine’s reconstruction, according to a draft copy of the meeting’s conclusions seen by Bloomberg.

A number of member states have called on the European Commission, the EU’s executive arm, to speed up its work on how to use sanctioned Russian assets to support Ukraine’s reconstruction, while other nations have asked that any such move respect international and domestic laws.

The proposals, which could be presented by the commission as early as Wednesday, aim to strike a balance between the two camps setting out both the terms for potential action, the directive’s legal framework and safeguards for those under investigation.

“The proposed directive, including not only rules on asset tracing and identification as well as asset management, but also rules on freezing and confiscation, should then also apply to the violation of union restrictive measures, where such conduct constitutes a criminal offense,” one of the documents says.

In 2020-2021, national authorities carried out more than 10,000 arrests linked to organized crime investigations and seized more than 600 million euros in cash as well as other assets, including hundreds of vehicles, vessels, aircraft and luxury articles, the document says. The commission estimates that criminal organizations launder at least at 139 billion euros every year.

The commission said that current cross-border efforts and procedures to identify and manage assets is often inefficient. The aim of the proposal is to ensure common standards and more effective cooperation.

At the same time, the directive also aims to boost the EU’s ability to enforce sanctions, even though the restrictive measures are not criminal in nature, and the bloc’s capacity to trace, freeze and manage assets and funds.

Under the proposal, measures relating to the confiscation of property are limited to situations where the asset stems from criminal activities such as money laundering, illicit arms trafficking and in some cases the violation of sanctions.

The proposals could change before they are formally presented and need to be backed by the European Parliament and member states.