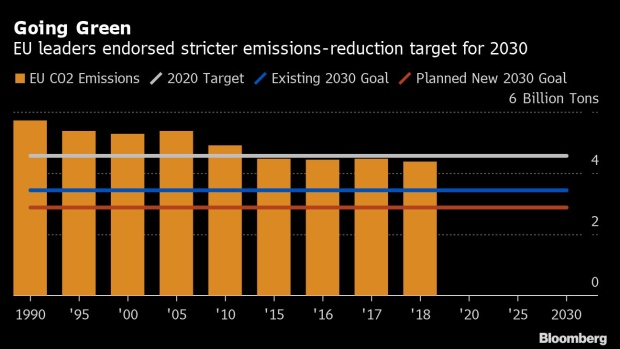 Solar panels sit on top of a warehouse near the hydrogen electrolysis plant at Energiepark Mainz, operated by Linde AG, in Mainz, Germany, on Friday, July 17, 2020. Europe is pinning its green hopes on hydrogen in a plan that sees hundreds of billions of euros in investment flowing into the clean technology and fueling a climate-friendly economic recovery. Photographer: Alex Kraus/Bloomberg , Bloomberg

(Bloomberg) -- Europe needs to double the share of electricity produced from renewable sources by the end of the decade to be in with a chance of meeting a stricter emissions-reduction target that would put the region’s economy on track to climate-neutrality, according to a report published Monday.

Europe wants to become the world’s first continent to zero-out greenhouse gases by the middle of the century under the Green Deal. The European Union’s 27 member states and the European Parliament are negotiating the final shape of a law for tougher climate goals in the coming decades after EU leaders endorsed in December a plan to reduce emissions by at least 55% by 2030 from 1990 levels.

Renewables accounted for more than 19% of the European Union’s energy consumption in 2019, just below the 20% binding target for 2020, according to the European Environment Agency. Power generated from green sources doubled from 2005 to 34% of production as member states move away from coal. Yet the pace of the green transition must accelerate to make good on the ambitious 2030 emissions goals.

“To meet these higher pledges, renewable power should grow to almost 70% of all EU generation by 2030 and to over 80% by 2050, allowing sectors that are harder to decarbonize to reduce their emissions through electrification,” the Copenhagen-based EEA said.

Higher carbon prices in the EU Emissions Trading System would help make renewable power sources more competitive, the EEA said. The cost of pollution in the world’s biggest cap-and-trade market has never been more expensive, rising to a record of 35.42 euros a ton last week.

Another challenge for policy makers will be tackling some adverse impacts of the shift to renewable power, the EEA said.