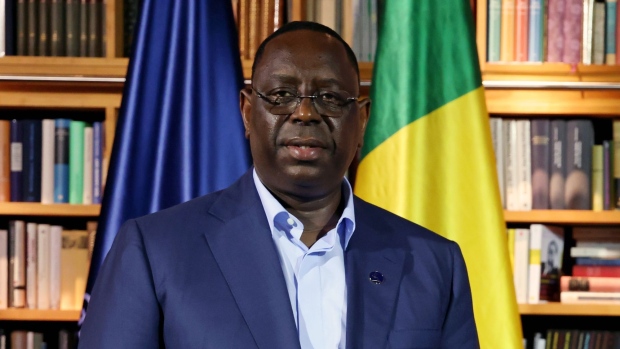 Macky Sall, Senegal's president, at a bilateral meeting with Germany's Chancellor Olaf Scholz on day two of the Group of Seven (G-7) leaders summit at the Schloss Elmau luxury hotel in Elmau, Germany, on Monday, June 27, 2022. G-7 nations are set to announce an effort to pursue a price cap on Russian oil, US officials said, though there is not yet a hard agreement on curbing what is a key source of revenue for Vladimir Putin for his war in Ukraine. , Bloomberg

(Bloomberg) -- Liquefied natural gas produced from a $4.8 billion West African project set to come online in the third quarter of next year will likely be exported to Europe and Asia, according to Senegalese President Macky Sall.

The Greater Tortue Ahmeyin project, straddling the border between Senegal and Mauritania, is being developed by BP Plc and Kosmos Energy Plc. It will produce an estimated 2.5 million tons of liquefied natural gas annually during a first phase of production, and a final investment decision is expected on a second phase, which could double its output.

“Talks are ongoing to determine which markets to supply, including the European market,” Sall said in a Sept. 6 interview in Rotterdam. “It’s the closest because it takes three, four days from Senegal by sea,” he said, adding that unspecified Asian countries would also be potential buyers.

The Tortue project is gathering pace at a time when the European Union is seeking to wean itself off Russian energy, in part by increasing LNG purchases from other producers. Germany, the biggest buyer of Russian gas in the EU, is building LNG import facilities, despite its goal of abandoning fossil-fuel power by 2035.

While gas from Tortue’s first phase is mainly destined for exports, more than half of Yakaar-Teranga’s production, set to start in 2023 or 2024, will go to the domestic market, according to Sall. Yakaar-Teranga’s output will be primarily used to fuel local power plants and industries, and produce fertilizer, urea and ammonia, he said.

Sall, who also holds the rotating chairmanship of the African Union, has championed gas as a fuel while countries transition to cleaner forms of energy. He plans to focus on securing external climate financing for the continent over the next two months and then push for the reallocation of the International Monetary Fund’s Special Drawing Rights from richer nations to African countries.

The IMF injected a record $650 billion into the global fiscal system last year to mitigate the impact of the coronavirus by releasing these reserve assets, which come with no conditions, to its member states.

Allocations were based on predetermined quotas, which take into account the size of countries’ economies and other factors, meaning just $33 billion went to the 54 African nations -- as much as France and Italy combined, and less than half of what the US received. The IMF then urged wealthy states to redirect part of their allocations to more needy countries on a voluntary basis.

Progress on reallocations “has been very slow” despite initial pledges from countries such as France and China, Sall said. “There are bottlenecks somewhere. That’s why we need to rethink the problem, so that Africa and other developing countries that need the funds to jumpstart their economies can finally access them.”

Back home in Senegal, Sall has faced political unrest in the last 18 months, partly fueled by uncertainty over whether he intends to run for a third term when his mandate expires in 2024. While the Senegalese constitution allows only two terms, other West African presidents have sought to justify extra terms after legal amendments over the past couple of years.

“I have never responded to this question in my country and I won’t answer it abroad,” Sall said when asked if he considered himself eligible to run again. “All I’ll say for now is that I’m not someone who seeks to threaten democracy.”