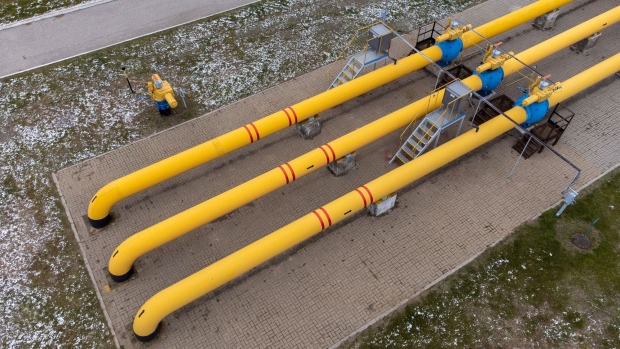 Pipework at the Kasimovskoye underground gas storage facility, operated by Gazprom PJSC, in Kasimov, Russia, on Wednesday, Nov. 17, 2021. Russia signaled it has little appetite for increasing the natural gas it transits through other territories to Europe as the winter heating season gets underway. Photographer: Andrey Rudakov/Bloomberg , Bloomberg

(Bloomberg) -- The European Union is planning a hard deadline to end long-term contracts to import natural gas as part of its green shift, a setback for top supplier Russia.

The bloc’s executive arm wants to prevent such contracts from being extended beyond 2049 in a sweeping overhaul of its energy markets, according to documents seen by Bloomberg News. The European Commission will also propose measures to strengthen security of supply as the bloc faces record prices and acute shortages this winter.

The plan -- set to be published on Wednesday -- will run counter to calls by Russia, which supplies about a third of Europe’s gas needs. The nation -- which is building up troops on the border with Ukraine -- has long argued in favor of long-term contracts and has repeatedly asked the EU to sign more such deals as a condition to extend an agreement to flow the fuel via its former Soviet Union partner after 2024.

Addressing concerns by some member states that the Kremlin is using gas as a political weapon, the EU executive’s proposal will also enable nations to react more effectively in crises.

EU heads of government are due to discuss the planned measures at a summit in Brussels on Dec. 16.

The risks for Europe are mounting this winter with gas stockpiles dropping to record lows for this time of the year and no end to the crisis in sight. The heightened tension between Russia and Ukraine threaten to further crimp supply, increasing the risk the energy crunch will persist into the next heating season.

Poland said last week it expected the gas market to stay volatile until a final decision on the controversial Nord Stream 2 pipeline project that would ship more Russian gas to Germany. German Chancellor Olaf Scholz said he will “do everything” to prevent Moscow from using the link to cripple flows through Ukraine, while Belarus’s leader reiterated threats to halt supplies if the West presses on with sanctions in a dispute over migrants.

In order to boost the EU resilience, the Commission wants to propose a more strategic approach to gas storage, including measures to ensure a high filling level at the beginning of the heating season.

When assessing risk at a regional level, member states will have to include an analysis of their gas storage levels and of potential risks related to security of supply, also from when storage is owned by foreign companies. If risks are identified, they will have to introduce counter-measures such as minimum storage obligations, tendering or auctions.

The proposal also provides for voluntary joint procurement of strategic gas stock by transmission system operators. Such reserves could then be released in case of emergency.

The Commission has a policy of not commenting on draft laws.

The ultimate remedy to the EU security of supply problems is a shift away from fossil fuels, according to the Commission’s proposals. The increasing share of domestically produced renewable gases should cut the region’s dependence on imported fossil fuels, bolstering its resilience. The EU wants to eliminate greenhouse gases by 2050, leading the global fight against climate change.