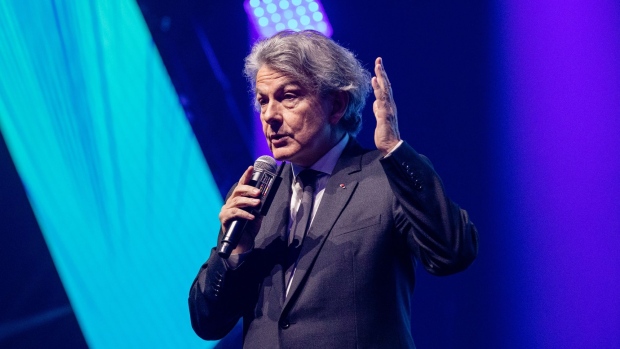 Thierry Breton, chief executive officer of Atos SA, speaks at the Viva Technology conference in Paris, France, on Thursday, May 16, 2019. Donald Trump’s latest offensive against China’s Huawei Technologies Co. puts Europe in an even bigger bind over which side to pick, but France's President Emmanuel Macron is holding the line. , Bloomberg

The European Union stepped up a push to become less dependent on imported raw materials such as rare earths and lithium, saying supply-chain disruptions caused by the coronavirus outbreak bolster the need for more self-sufficiency.

The European Commission vowed to create a raw-materials alliance by the end of the year in a bid to “increase EU resilience in the rare earth and magnet value chains” because of their importance to industries ranging from renewable energy to space.

The commission, the 27-nation EU’s executive arm in Brussels, said the alliance would expand its remit over time to address other critical raw-material and base-metal needs.

“We cannot afford to rely entirely on third countries,” European Industry Commissioner Thierry Breton said in a statement on Thursday. “By diversifying the supply from third countries and developing the EU’s own capacity for extraction, processing, recycling, refining and separation of rare earths, we can become more resilient and sustainable.”

The pandemic is giving political impetus in Europe to a more active industrial policy. This has long been a sensitive subject in the EU because of a traditional split between northern governments with a free-market bent, and southern ones with interventionist inclinations.

While the EU has for years sought to limit the economic risks of depending on foreign raw materials, the bloc has largely deployed its international trade policy and domestic research programs in the campaign. For example, the bloc has repeatedly complained to the World Trade Organization about Chinese export restrictions on raw materials.

The commission initiative on Thursday was hailed by Eurometaux, a Brussels-based association that represents non-ferrous metals producers and recyclers in Europe.

“We are very enthusiastic that this is happening and we are very happy to work with the commission to make sure that this is a success,” Mikael Staffas, Eurometaux’s president and chief executive officer of Sweden-based Boliden AB, said in an interview.