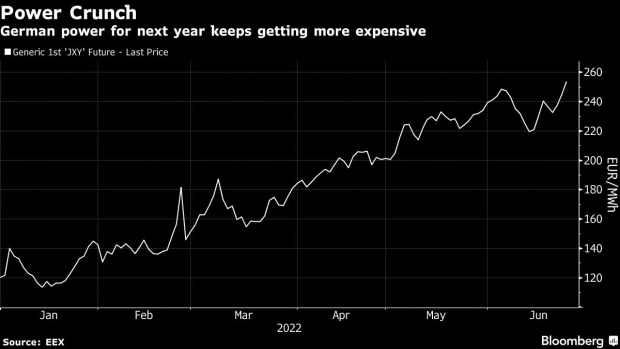 An employee adjusts the control valve of a wellhead at the Uniper SE Bierwang Natural Gas Storage Facility in Muhldorf, Germany, on Friday, June 10, 2022. Uniper is playing a key role in helping the government set up infrastructure to import liquified natural gas to offset Russian deliveries via pipelines. , Bloomberg

(Bloomberg) -- European power prices surged to the highest level since December after Germany took a step closer to rationing natural gas supplies amid cuts to flows from Russia.

Rising gas prices have been pushing up the cost of electricity across Europe, fueling inflation and increasing the economic burden on businesses and households still recovering from the pandemic.

The increase in gas prices is also boosting demand for coal as a power source, a polluting alternative that could be increasingly called upon this winter if gas supplies remain disrupted. European coal futures rose as much as 4% to $270 a ton Thursday.