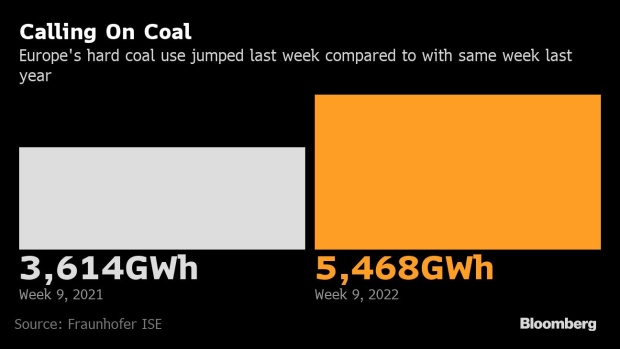 Coal pile near a coal-fired power station at the Port of Rotterdam in Rotterdam, Netherlands. , Bloomberg

(Bloomberg) -- European utilities are getting increasingly reliant on coal for power as the region tries to reduce its dependence on Russian natural gas.

Even with prices for the dirtiest fossil fuel surging with most other commodities, it’s still much cheaper for power plants to burn coal than gas to make electricity. Last week, plants on the continent burned 51% more of the sedimentary rock than a year earlier, according to data from Fraunhofer ISE. At the same time, gas demand from power stations declined.

The shift may be here to stay, even if it’s bad for the climate. As Europe plans to curb the use of Russian gas by two-thirds this year, companies will inevitably rely more on coal, although the region will also seek to boost supplies from other gas producers.

“High gas prices across Europe are driving down the economic competitiveness of gas relative to coal,” said Kesavarthiniy Savarimuthu, an analyst at BloombergNEF. That’s making utilities switch from gas to coal, particularly in Germany, which is already the largest consumer in Europe outside of Russia.

Russia is Europe’s biggest supplier of coal too, accounting for about a third of the total in 2020. And with the country increasingly isolated, traders are scrambling to pick up the fuel from other producers, including Colombia, South Africa, Australia, Indonesia and the U.S.

In the past week, shipments of coal from Russia were still sent to the U.K., Germany and Latvia, as European sanctions don’t yet block imports of key energy sources. A shipment of 30,000 tons of coal left Murmansk in northwest Russia on March 3 destined for Belfast, according to shipping data provider Marcura data compiled by Bloomberg.

The record price volatility is likely to keep going for some time. Coal prices for next month was little changed at $360 a ton on Friday. However, they are down 16% this week after more than doubling in the previous period.